The day the phone stopped ringing

My father was at the peak of his career when he walked out of the corporate world. Literally. At the age of 51, and having helmed the marketing teams of the top consumer durable companies of his time, my father one day decided that he did not want to work for somebody else and walked out. My sister was 24 and getting married that year. Or maybe it was after she got married. The details are hazy as even though I was 20, I was too young to be told.

But after 30 odd years of being in the industry, he had had enough. And that is a sobering thought to those of us who feel the same after a decade or so. The timing wasn't great, to say the least. And the next couple of years were the worst my parents have ever seen.

Let me put things in perspective here. He worked for the best companies in the country, from Videocon to LG Electronics and reached the level of Vice President in an era where the designation did not exist. In fact, it was the Korean companies like LG and Samsung that brought the title...till then General Manager was the highest you could go. He had people fawning over him at every step, dictated how dollars were spent and was spoken about with reverence in the industry.

And then he quit. I never realised how hard that must have been for him until I walked down my own career path. A non-linear path to say the least, I switched from marketing to being an unknown writer just when I was showing promise. I was handling million dollar budgets, felt all-so important and so decided to chase my dreams. Which I did.

It wasn't easy. But I crawled my way through. After a couple of years, it paid off and I eventually started getting published in great places. And then I decided, against my gut, to go back full time and took up the job of Editor at NDTV Food. I'm glad I did. Those years were memorable and I grew tremendously in my profession.

But what it also gave me was a break from anonymity. The industry recognized my position and thus me. And my name became recognizable. And then I quit.

The one advice, or rather warning, my father always gave me, was that people recognize your chair, not you. The biggest difference, when you quit your job is that the phone stops ringing. It is a startling thing, and not one that you think you would miss. But miss it you do. Because that silence of the phone marks the demise of your importance to the people who otherwise treated you as gold.

The beauty is that life is not linear, much like my chosen career graph. Since I have moved to Singapore, I have done cover stories for magazines that I did not even dream of before. And now, more than ever, I know that I will constantly be plotting my next step forward. But what this breather allows me is to sift the wheat from the chaff. I now understand people better. The people who did not reply to an email or those who didn't bother making time in their schedule for a meeting whereas a year back they would have asked me for one. And I see the people who still look at me for advice. My former team, some people in the industry, a handful but a precious few.

This entire saga has been told to share something that I believe in very strongly. It is a lesson in humility. When you are riding high, do not overlook others. Never leave mails unanswered, phone calls unreturned. Life is long and as I said before, the same people you walked past on the ladder up will probably overtake you at some point. Ambition is a fine thing, but do not pursue it forsaking compassion. And do not fall in love with the chair you sit on at work. It will go one day, and the phone will stop ringing. It is your actions today and for the days to come, that will define who stands next to you when that day arrives. Invest wisely. Answer that email. Make time.

It is the respect you give someone when you don't need anything from them that defines the person you are. Choose who you want to be, wisely.
at October 03, 2017 3 comments:

Email ThisBlogThis!Share to TwitterShare to FacebookShare to Pinterest
Labels: work 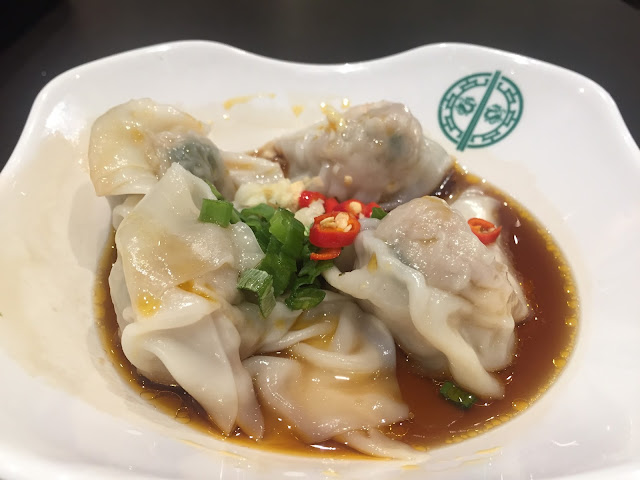 Until I left India, I had never eaten in a Michelin starred restaurant. The words Michelin or Three Hatted evoked a sense on awe in me. Surely only perfection could achieve such accolades, that too when you had to earn them year after year and not sit on your laurels. However, in the past 8 months, I have given myself a crash course in global gastronomy. I have eaten in Michelin Starred restaurants in Singapore, Tokyo, New York, Sydney and many other cities. What I have realised is that the stamp itself does not guarantee excellence. It does guarantee the fact that you will not have a bad meal at the restaurant, but perfection remains elusive. Some of them have blown my mind, making me question my earlier culinary yardsticks. But a few failed to make an impact. 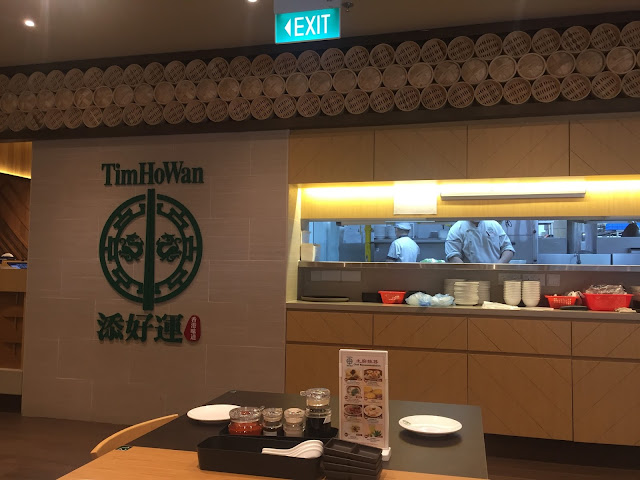 Hong Kong based dimsum house Tim Ho Wan now has 45 branches across the world. A couple of their restaurants in HK have earned one Michelin star, dubbing the restaurant as the 'most affordable Michelin starred restaurant in the world' (before Singapore's hawker centers won the awards two years ago). What started as a 20 seater modest shop, now boasts of posh outlets with waiting lines snaking around the block. Defying convention that dimsum is typically eaten in the morning or at tea time, until last year Tim Ho Wan Singapore only opened doors at 6pm. Thankfully, they now start serving at 11am and you can drop in for a quick lunch too. 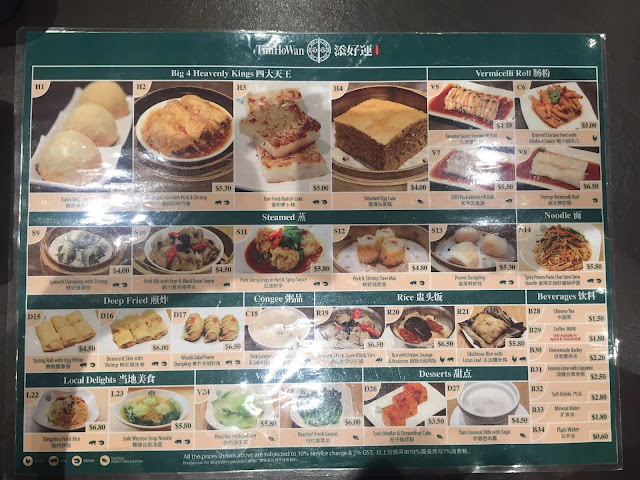 The menu is straightforward and pictorial. As with Din Tai Fung, you just mark the items you wish to order on the slip on your table and your server will get them for you. No language issues there! The dishes may come in random order though. I started off my meal with pork dumplings in spicy sauce. The thin casing of the dumplings was easy to tear with chopsticks and the meat filling was juicy and well balanced. The soya sauce it swam in could have done with more heat but dipping the dumpling in their in-house hot sauce did the trick for me. 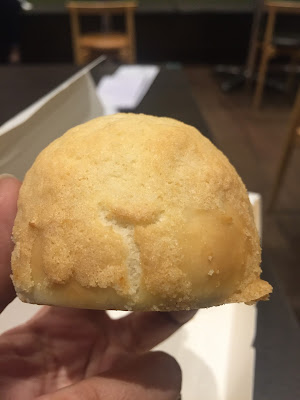 After the dumpling, I decided to try their famed baked pork buns. I love char siu but am not a big fan of the fluffy pork buns. Tim Ho Wan does a twist on them and bakes them so they have a bite. Definitely a step-up. The casing was still a tad bit sweet but the char siu was delicious. I definitely recommend these. 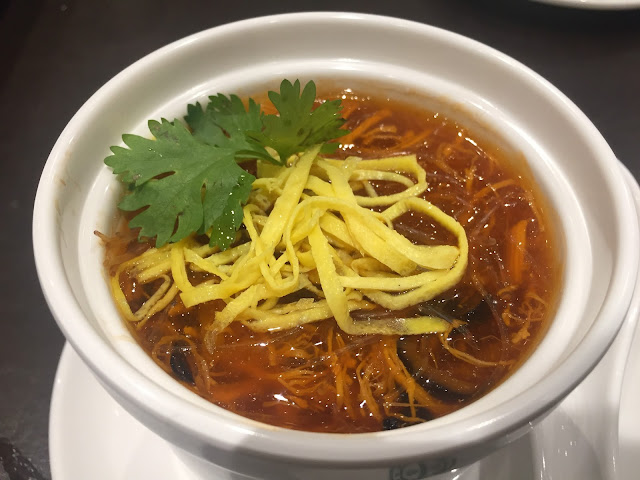 The Hong Kong style shredded chicken soup was strangely gelatinous, though the flavour reminded me of India's hot and sour soup (albeit with a pack of jelly added). 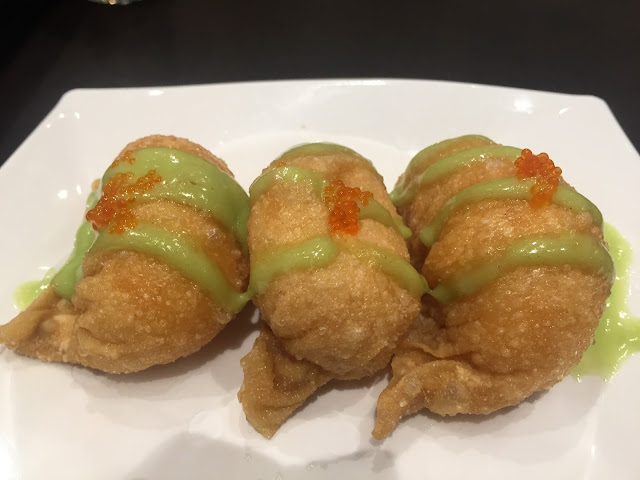 The big disappointment of the meal was the dish I was most looking forward to. The crispy prawn dimsum with wasabi sauce is well acclaimed here, though for the life of me I can not understand why. A luscious big prawn shadowed by a tasteless wrapper and drizzled with a suspiciously synthetic wasabi sauce, it was the stuff nightmares are made of. I wish I had ordered the har gao instead.

With a meal for 2 that costs $25, Tim Ho Wan remains affordable, especially for a restaurant with Michelin heritage. Are they a good alternative to Din Tai Fung? I would think so. But are these the best dimsums in town? If they opened a shop in Delhi, I would still not agree...in Singapore, the idea is almost blasphemous.
at October 03, 2017 No comments: