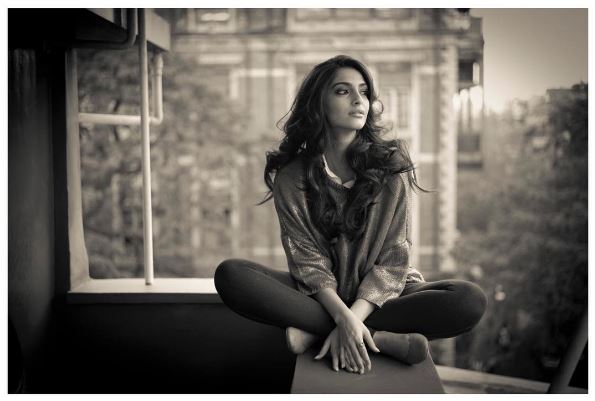 
Sonam Kapoor is known for her fashion style and ability to carry herself with aplomb. Her acting skills may have critics, but you will rarely find a person who doesn’t believe that she looks like a Diva. But as Spiderman said, “With great powers, comes great responsibility.”

How many times have you caught yourself staring at a magazine cover, wondering how a certain celebrity looks so incredibly stunning. Have you stood in front of your mirror, critically evaluating your body from every angle? Ever left that bikini in the closet and packed yourself a one-piece swimsuit, just because there is no way you can possibly look good in a bikini (‘good’ defined by the image we have of Alia Bhatt or Katrina Kaif in a bikini). Body shaming is when somebody else points fingers at your natural self, but what about when we are our own biggest critics? When we forget how to love our own bodies?

In a recent article for Buzzfeed, Sonam Kapoor makes some powerful statements. She shatters the myth that actresses wake up looking pretty, “Please know that nobody wakes up like this. Not me. Not any other actress. (Not even Beyoncé. I swear.)” Further, Sonam offers a sneak peek of what goes into making a celebrity look so good – “Before each public appearance, I spend 90 minutes in a makeup chair. Three to six people work on my hair and makeup, while a professional touches up my nails. My eyebrows are tweezed and threaded every week. There’s concealer on parts of my body that I could never have predicted would need concealing. I’m up at 6am every day and at the gym by 7:30. I exercise for 90 minutes and, some evenings, again before bed. It’s someone’s full-time job to decide what I can and cannot eat. There are more ingredients in my face packs than in my food.”

The concept of beauty has stopped being subjective. More and more young girls are looking at celebrities, models and actresses in awe and then at their reflection in the mirror with disdain. Instead of celebrating their own body and trying to look the ‘best they can’, they try to ape these stars and end up with complexes and issues. And these complexes are not particular only to regular people like you and me. Sonam confesses that actresses are under tremendous pressure to look ‘flawless’ and end up stuck in a spiral of bad diet choices and an unhealthy view of themselves. What you see, may not necessarily be the reality. Critics argue that Sonam’s statements are hypocritical, she herself having lost 33 kg for her first film, and now a brand ambassador for beauty brands that promote ‘flawlessness’. But credit must be given where it is due and a celebrity coming out and busting the myth that all models/ actresses look effortlessly gorgeous, is commendable. 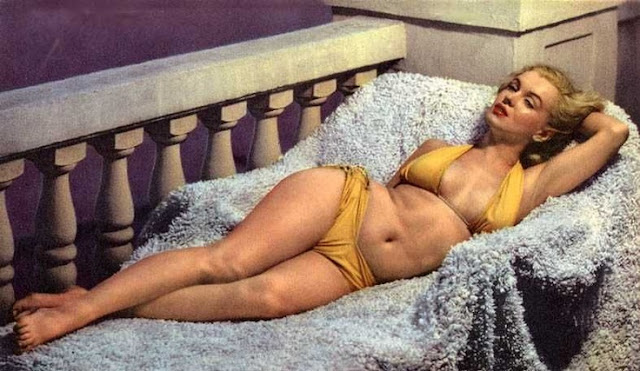 Perhaps it is important to remember that the concept of beauty is relative and that it changes with times. Marilyn Monroe, still regarded as one of the sexiest women who ever lived, had curves and a soft belly, not washboard abs. As did Indian actresses like Parvin Babi and Zeenat Aman.

As Sonam says “The ball is in the media’s court to celebrate fit bodies rather than thin ones, and to know the difference.” At some juncture down the line, thin became synonymous with fit and healthy became another term for plump. Instead of focussing on celebrities and their supposed ‘flawless’ bodies, it is important for us to eat healthy, exercise regularly and be the best version of ourselves. Only when you truly believe that you’re beautiful, will your inner radiance shine through. 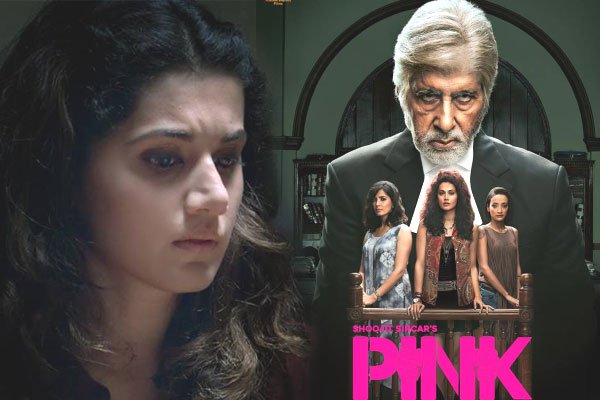 I was silent as I walked out of the cinema hall yesterday, after watching Pink. The din around me seemed muted, as if I was insulated in a bubble of my own thoughts. Thoughts which were interrupted by my cousin who chirpily asked - So, how did you like it? How do I answer that, I thought. How can I put all these emotions into words. Instead, I just turned to her and nodded with a smile, and said - I liked it.

The ride home was quiet too. The husband, concerned about my pensiveness. It was only when we got home and spoke about the movie for almost an hour, could I make sense of what I felt about the film.

So, to put it in words, it left me unnerved. With an uncomfortable feeling. Unsettled. Perhaps these words can help you understand how the movie - Pink, made me feel.

The movie itself is fairly well made. Good acting by the young cast, Amitabh Bachchan and all other actors also played their roles well. Great direction. Gripping, never sluggish.

But this movie is not one that needs to be seen for its cinematography or special effects. What stayed with me when I left the hall yesterday, was just how real the story was. And how easily believable. We've all done stupid things growing up. Things, which in retrospect seem so terribly risky. Never quite understanding how quickly things can spiral out of control. 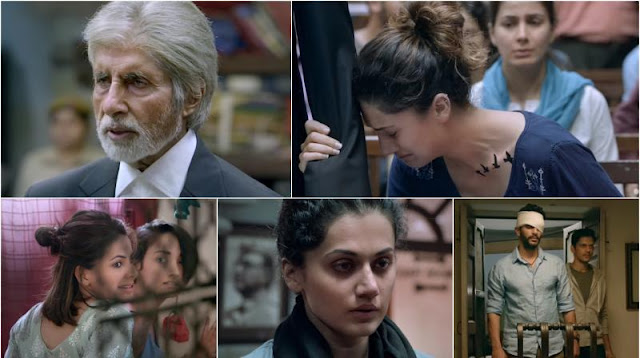 The film also questions a lot of preconceived notions we have. I come from a very progressive family and have been married into one equally so. Even then, there are subtle perceptions that worm their way into the basic way we think, without us realising it. And that, to me, was what the movie was about. How a girl is perceived in certain situations, vis-a-vis a boy, only because she is a girl. How even in well-to-do homes, we still have an understated way of differentiating between our girls and boys. Different rules for both genders. Timings, freedom to live apart, relationships, parties, clothes... As Bachchan says in the film, a girl's character is tied to the clock..what time she comes home. The feminist in me (and many of my close ones) will rage at the above statement. There is no difference, they will insist. But we can not turn from it.

Why do we not let the men in the house clear the table after a meal? Or sweep the floor if the maid is on holiday? We give our boys so much importance that their ego can not handle it when they are refused something when they grow up. Why is it that when a 20 something boy goes out with his friends to a pub, it's ok, but when a girl does the same, parents feel uncomfortable. Security is only one part of it. When you dig deeper, you realise it is also their innate belief that it is not 'nice' for girls to be seen out drinking so late.

Why is it, that when we see a young woman drinking, we assume that she is approachable and you have a greater chance of 'scoring' vis a vis one who doesn't visit pubs. The basic premise of this perception is utter rubbish. Girls in B-towns or lower middle class families are also intimate with men...the only difference being that they will not be open about it.

Why are girls from the North East considered 'easy'? Because they wear more revealing clothes? Has it maybe occurred to you that they come from matriarchal societies where the women are more empowered...are safer. Thus, they don't have to hide behind 'what will people think'.

Two dialogues in the movie touched a chord with me. One was when Amitabh Bachchan says that maybe we have been raising our children all wrong. Instead of teaching our girls to be careful and compromising, maybe we should focus on raising our sons right. Teach them respect, boundaries. Our daughters will automatically be safe. 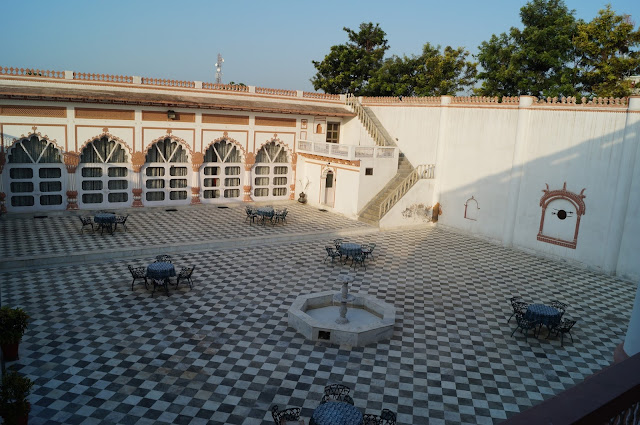 Things have been a bit crazy in my family for the past 7 months and thus my writing and my travel were both impacted. I can't really say that things have settled down now, but perhaps we are all trying to find a way to live this new 'normal' better. As a consequence, the travel has started again, albeit in short bursts and much closer to home.

Last weekend, we drove down to this lovely property called Mud Fort Kuchesar. Set amongst green fields and basically nothing else, the Mud Fort is merely 2 hours from Noida by road. This is a blessing, especially when you do not want to spend half your day in transit. The fort itself is 200 years old and belongs to the royal family of Bharatpur. It's quite a wonder that it is not more popular.

With a massive moat surrounding it, the fort has been divided into two, only half being used as a hotel. Our room overlooked the central dining courtyard and had a lovely shared verandah outside, where a drink or two kept me company as the baby slept. The room was large and airy, much like the high-ceiling(ed) rooms in my erstwhile ancestral house in Ludhiana. The AC provided welcome respite from the humidity and heat that is typical of UP.

Now let me put a disclaimer. If you like activities and amenities, you may be better off at a five star property elsewhere. This is a heritage hotel, in the middle of a village. And thus, to fully enjoy it, you need to be open to new experiences. I rediscovered the fact that I could ride a cycle (I haven't ridden one for 25 years, since getting grievously injured from one). What could be more exciting than riding along well maintained roads with green fields on both sides and the only traffic, a stray fellow-cyclist? We did pottery with a local potter, and made some not-so-perfect diyas for Diwali too. 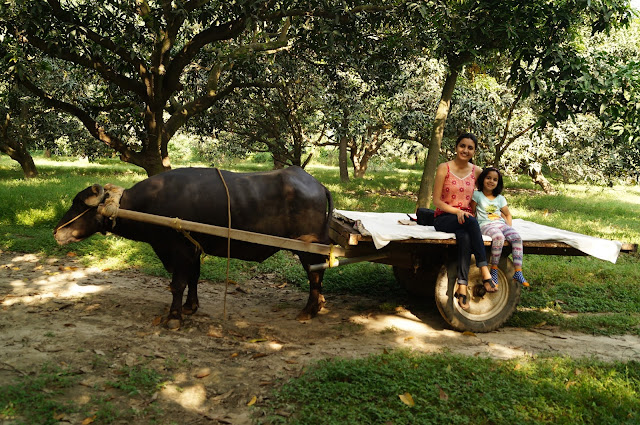 Another great adventure was the bullock cart ride. Done in style, the cart had mattresses for our comfort and took us deep into the owner's lands towards mango orchards. The baby learnt how to climb trees and breakfast was picnic-style on a khatia. Post breakfast indulgence? We climbed atop the tube well and dipped our feet in the freezing cold water, watching leaves float by like sail boats!

The service deserves special mention. Nothing was too much to ask for. The baby always had 2 people running around her, trying to get her to cycle or play carom or just catch peacocks (did I mention the gazillion peacocks who live there?). The food was exceptional and homely. I only wish they did a few local dishes too, and a couple of chutneys to take it a notch up. 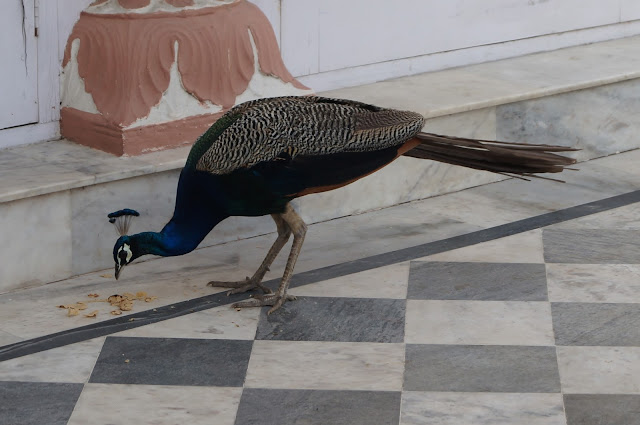 The weekend was idyllic and perfect. But perfection is relative. If the good ol' country life excites you too (and yet you like your comfort), Mud Fort Kuchesar makes for a great weekend break.