What is it like to be born a girl in India?

I read a very well written editorial piece yesterday in the Mint titled 'What is it like to be an Indian Muslim?'  A fairly well written piece, the writer had me do a double take when he concluded with the following:

"..It is a fine thing to be male, middle class and Hindu in India. Even in a deprived part of the world, one is privileged.."

I did not think too hard into that until last evening when I was driving back home. But to explain that, let me rewind a little.

The very fact that I am writing something titled thus, seems inappropriate to the hilt. I consider myself lucky and privileged, to have been brought up in a family that does not differentiate between boys and girls. They actually wanted two girls and we decided to fulfill their wishes. We grew up with equal opportunities, being told we must make a mark in the world and with freedom that millions don't have.

Unfortunately, this differentiation is so deeply entrenched in our belief structure that it shows up when you least expect it. When I was driving home at the extremely respectable time of 9:45pm, I found myself urging the car to go a tad faster, lest I receive an sms asking where I was and when I would get home. I usually make it a point to get home by 10pm if I am driving alone or else try to get a friend or a friend's brother/dad to follow me home.

Take a minute to think about that. I am 33 years old, yet I or my family does not have the confidence that I can spend a languid night out and come back when I want to.

I do not remember any guy I know being asked a similar question, with the same intention. If a guy is asked what time he will get home, it is either from a logistical point of view (does he have the keys to enter?) or that you'd prefer him to come earlier to spend time with you. But it's never he 'should' be home by 11.

'Should'. The connotation that I tried to understand one day.

Now that I work in an office set-up again, I get free to go out only by around 7:30-8. Take Delhi distances and traffic, which means that wherever I wish to go, I will only reach by 8:30-9. And I should be home by 10...which means I should spend only 15 minutes at the place I plan to go to?? Ridiculous much??

To understand this 'should', I sat down with my parents recently and asked them why they felt so uneasy if I were to come home late. Safety was the obvious point, which I agreed to and said I'll keep something in the car, download an app, msg them where I am, when I leave and be followed if it is beyond 10:30. After a little hesitation, my extremely-modern parents also let it slip that it doesn't seem 'nice' if girls are out in the night. Ok then. Let me reiterate. I am 33, fairly balanced a person, have friends who are equally so and whom my family 'approves' of, when I go out, if I go out, I'd probably go for dinner or to a new place opened up; yet, if someone saw me out with my friends (in an extremely respectable place) at 10pm, it would not seem 'nice. I wonder what those people would be doing there if it is not a place I should be at. I also wonder if the same point would have been put forth if it were a guy who was out for drinks with his pals. It wouldn't.

I am extremely privileged. I do believe that. However, if such an incredibly deep bias rests inside us without us even realising it, imagine the unseen shackles other girls live with, girls born into families that are not even a fraction as modern as mine is. Ponder on that as I make plans for a movie in the afternoon today...because you see, a night show is out of the question.
at October 18, 2015 5 comments: 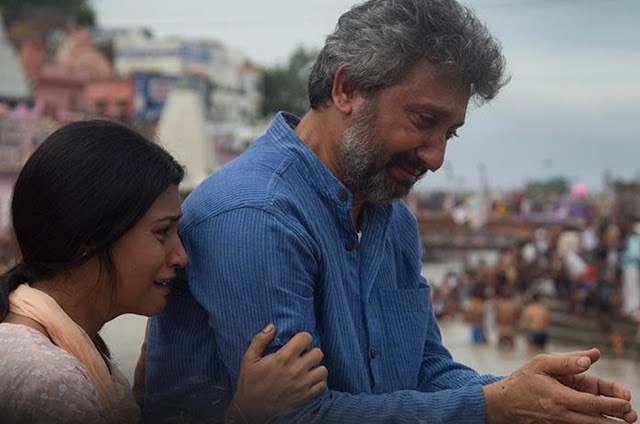 I saw the movie 'Talvar' last night. And no, this is not a movie review. It can't be, because I find it difficult to be unbiased about this one.

I was living in the same sector (Jalvayu Vihar, Noida) when this incidence took place, merely 3 blocks away. From afar, I witnessed the media frenzy, heard gossip from anyone who knew the family and read newspapers which for the longest time were obsessed with Nithari and Aarushi.

Which is what I think the problem was. The fact that these 2 cases coincided with each other. Don't even get me started on Nithari, I have my theory on Koli merely being an accomplice. But through the years (and I just realised that it has been 8 years!!), I continued feeling strongly about the Aarushi case. A lot of people I know do too, which unfortunately amounts to nothing.

What made me a disbeliever, is not the theory that parents allegedly killed their only child. Honour killings (unfortunately) happen all the time as does female infanticide. No, it was more than that. I think it was the way news kept pouring in about the case and how over time we realised that the findings were all contradictory in nature. One lab would find something, another would refute that altogether.

Over the years, I have also followed Nupur Talwar's cousin who has spoken in international media about the loopholes in the case. You can read some of it here.

I am not a lawyer, neither am I a forensics expert. However, as this was largely a media trial and barely a judicial one, I am allowed to raise my questions. And my questions are plenty. Why was the theory of the other 2 helpers being in the house not followed through, when there was clear evidence of their visit in Hemraj's room. Why would the fact that a parent who has just lost her child is stoic in an interview (here's the opinion piece by Sonia who interviewed her on NDTV 8 days after the murder) translate into her being un-emotional about it. Why was the main door locked from outside? The theory of Hemraj being killed in the room and then his blood being wiped away seems ridiculous considering Aarushi's blood was all there...thus parents somehow knew exactly which blood splatters were his and which were hers! Why were the narco tests overlooked, wherein the parents were proven innocent and the compounder confessed and even led them to the murder weapon. There are plenty of questions like these, many of which you can also read about here.

But the 2 biggest questions I have are these. If the Talwars were guilty, why, why in the world would they reject the closure report of CBI that said there wasn't enough evidence to convict them. If they had accepted it, they would walk free. But they said that they believed in the judicial system of the country and got the case opened. And we all know how that turned out.

In most countries including USA and UK, a conviction is given only when it can be 'proven beyond reasonable doubt'. The entire case (as confessed by CBI too) was based on circumstantial evidence. There are so many holes in the theory, so many botched up investigative turns, that it can not be said 'beyond reasonable doubt' that the parents killed Aarushi. Yet, they were convicted and are both currently serving life sentences.

Times of India and many other media houses are working on trying to get the case relooked at. It has happened before with Jessica Lal, and there is always a chance it can happen again. But what shook me up when I walked out of that hall last night, was how fragile our sense of security is. A well respected, educated, well-to-do family's life changed overnight and the belief they had in justice and judicial processes shattered forever. The parents died anyways, that exact moment when they saw their daughter dead (whether they are innocent or guilty). What scares me is how easy it is to get stuck in a legal vortex and how helpless that can make you.

May the case one day be reopened. May truth be known, whatever it is. And if, by any chance, the parents are innocent, may the country hang its head in shame for allowing this to happen.

PS- In other news, wonder why we haven't heard a word about the Sheena Bora case since Maria was transferred (such a coincidence, isn't it?). Oh well.
at October 08, 2015 2 comments: