I believe in giving second chances. I do. But when it comes to food, I am very stingy about second chances. There is so much to eat, so much to explore in one lifetime that I do not like to waste a meal on what may have already proven to be an average experience. However, when my dining experience differs drastically from that of most people, I sometimes eat humble pie and go back to the restaurant for a re-run. Sometimes I come back with my beliefs reinforced and sometimes (rarely though), my opinions are transformed.

SodaBottleOpenerWala launched with much fanfare in Gurgaon more than a year back. In a market where diners were starved for Parsi food, the only other option being the canteen at Parsi Anjuman, it promised to recreate the legacy of Iranian cafes, so popular in Mumbai. Launched in the bustling Cyber Hub courtyard, it went on to open an outlet in Khan Market, one in Bangalore and is all set to launch in Mumbai (more about that later).

My first experience with SBOW in Cyber Hub was underwhelming at best. The decor is quirky and recreates nostalgia with the checkered table cloths and the Irani bakery counter. However, as interesting as the menu is, the food failed to impress. My palate, nascent to Parsi food, did not complain too much though.

And then I moved to Bombay. The naysayers may dis Britannia or Ideal...but I personally fell in love with them. The fact that all 3 generations of the family are always there to greet you or serve you at Britannia, the cat which owns the cash counter and claims it as its own, the buzz and the nostalgia, it is all real, acquired and not something that can be recreated. And don't even get me started on the Berry Pulav, the Cutlets or my favourite, the Sali Keema.

But I digress, which is what food memories make me do. In the recent months, I have had the pleasure of interacting with many ingenious people who have been involved in building SOBC, like Chef Saby who's recently opened the gorgeous Lavaash or Mohit Balachandran (known better as ChowderSingh, his pseudonym) who runs the entire SOBC franchise nationally and ofcourse AD Singh himself. And the fact that such great chefs and restaurateurs diligently backed this franchise, urged me to go back and give it another go.

Alas, the second visit was equally disappointing. The Khan Market outlet is smaller but cozier with a nice balcony (which now doesn't have seating due to the MCD sealing). I tried the Chicken Farcha and the Komli Fry with my drinks. A word about the drinks first. Though the cocktails here are named creatively, they sit on the edge when it comes to delivering flavours. The Masala Vodka had way too much masala and one couldn't even taste the vodka or lime in it. The Banta drink tried to be quirky and was mango based but was a far cry of the perfection that Monkey Bar's (from the same restaurant owners) Mangaa has been able to achieve. Their version of the Whiskey Sour, thankfully, is a winner and the one I recommend you order here.


The Chicken Farcha came accompanied by a delicious and fresh coriander chutney, onion and lemon. As seemed to be the theme of the evening, the chicken was underwhelming. The meat was a tad bit too dry and even fared worse than the passable farcha (where passable is being generous) one gets at Ashmick's Snack Shack on Pali Hill.


The Komli Fry, thankfully, single-handedly saved the day. Delicious and moist jumbo prawns wrapped in onion strings and deep fried, it was akin to having onion rings and a spicy prawn starter, all in one. Absolutely scrumptious and a must try.

I also tried the Tamota Papeta Par Eeda, which I remembered as being the only thing I liked the last time I ate here. A skillet with tomato-onion chutney, sliced potatoes and 2 fried eggs, this goes well with Maska Pav. The latter is something which you can order by itself too, freshly baked inhouse and loaded with melting butter, the pav reminds me of the fabulous bhajia pavs sold by the guy who would sit outside my complex in Bombay. 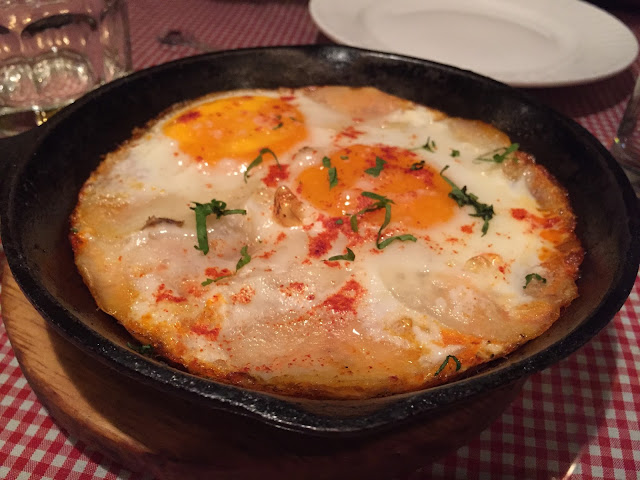 With hits and misses, unfortunately SBOW remains on my list of places that I may not recommend or return to. However, you should try it to have an opinion of your own. And if you do, make sure you try the Mutton Berry Pulav, Prawn Patio, Veg Cutlet and Goan Sausage Pav, recommendations by Mohit that I wish I had received before I ordered my meal.

With their doors opening in Mumbai soon, I stand as a third person to witness how the city reacts to their food. Will the 'trendiness' be able to help them carve a niche or will the average Bombayite realise how blessed they are to have the age-old Irani Cafes that still hold their own in the city.
at September 09, 2015 1 comment: