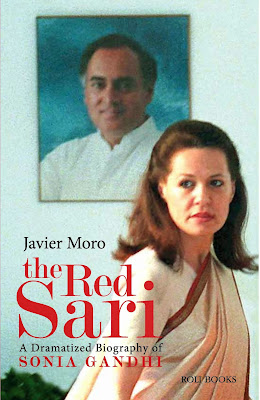 Written by Javier Moro, The Red Sari tries to recreate the life of Sonia Gandhi. A public figure open to scrutiny, she has often been judged, sometimes justifiable so but more often than not, as a consequence of her surname. But let's backtrack a little.

Let me mention as a disclaimer that I am not a fan. I do not have any political alignments, though I wish feverishly for a leader that I can believe in. Thus, for the most part, this review is from the eyes of a curious reader.

Moro traces the life of Sonia from her childhood and doesn't glorify her growing-up days. The daughter of a hard-working mason, Stephano Maino, her initial years centered around her family. Growing up in the small town of Orbassano, she and her sisters studied in a convent school 15 km away. The first time she spread her wings was when she requested to go to Cambridge and learn English. This is where she met Rajiv Gandhi, and her life changed forever.

The author may have interviewed many credible sources but a large part of the book is fictional and the authenticity of it is debatable. The facts are all correct, it is the emotions and the internal turmoil that fall in the grey area.

The book travels with Sonia as she and Rajiv fall in love, convincing her conservative father and his politically-bound mother to get them married. Perhaps as a consequence of one of the sources being Indira Gandhi's personal assistant, a large part of the book focuses on Indira herself. She is portrayed in all her shades, the obedient daughter, the confused wife, the love-blind mother, the iron lady, the strategist, the dictator and a tired woman at the end of the day. The home-dynamics of the Gandhi household are interesting, especially when Menaka enters Sanjay Gandhi's life.

What captivated me was the struggle of a woman, so far from anything familiar. How she witnessed the political climate change and realised the burden of the surname that she had married into. She has often been shamed as a gold-digger and unless you know her personally, it is all up for speculation. But Moro pens a credible tale of how she fought against fate and finally succumbed to it. Staying on in a country which had not only shot her mother-in-law at point blank range but also blown up her husband to bits, and where her children were under constant threat, must have taken a lot of courage. Whether she did so to keep the Gandhi name alive or to safeguard the future of her children can be argued. But it remains an undeniable truth that Sonia Gandhi was dealt her fair share of trials and she managed to walk through them without breaking.

The book was condemned by the Congress party and an unofficial ban was issued for seven years. It has only recently been released here, though the Spanish edition was published seven years ago. This in itself nudges me to believe a part of the story, as it humanizes this woman who hides behind an inscrutable mask and a name that weighs more than what one can imagine. A riveting read, both for the followers and the naysayers.