Lootera - An oldie but a goldie

Lootera doesn't have too much to pull the crowds in. Let's face it, there is only so much Sonakshi Sinha can claim to her name besides having a popular father and starring with the biggies. Or so I thought. To be fair, the only thing that pulled me to the movie was Ranveer Singh, the cheeky underdog whose endearing acting in Band Baaja Baaraat entertained thoroughly. I was to be proven wrong. 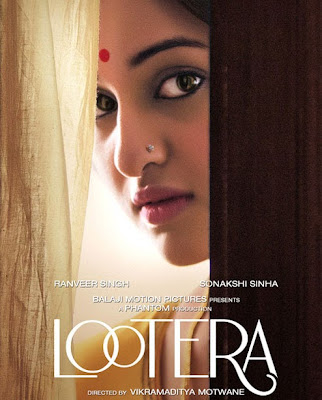 Lootera is set in the 1950s in newly independent India. The movie traces the unlikely love story of a Zamindar's daughter. The couple meet in her village but fates do not favour them. Until many years later when their paths chance to cross again.

The movie is nostalgic, the vintage cars beautiful and the entire feel of the film is something like a softly (and slowly) sung ballad. The only hitch is that it is predictable. Very predictable. There are 2 twists in the film and I found myself waiting for them to be revealed, rather than be surprised by them. Perhaps having read the story by O'Henry (that the film is inspired by), this was to be expected.

Having said that, there wasn't a moment in the film that I was bored. Agreeably, it was a slow screenplay. But one that you don't mind witnessing.

Ranveer Singh, unfortunately disappoints. Its not so much that he didn't act well as much as he held himself back too much. He was broody, non descript and often unnecessary. Only in some scenes did he break through the mould and be the effortless actor that he can be. Thus it is no surprise that his friend Dev seemed so much more interesting than him. So much so that at one point one is forced to wonder why Sonakshi didn't fall for him instead!

Which brings me to the best part of the movie. Sonakshi Sinha has never struck a chord with me. I find her unattractive, loud and an unneccesary accessory in movies. None of this is true for this film. She finally proved that she can act. Pakhi is soft and pretty when she needs to be and a fireball when required. She keeps the film together and she keeps it real. I am forced to eat my words!

All in all, not a blockbuster but definitely a film one should watch.

Paisa wasool moment: An unlikely choice but the scene where they both battle for him to give her an injection. Simple scene but screams of passion and selfless love.

bang on for the 'paisa vasool moment'