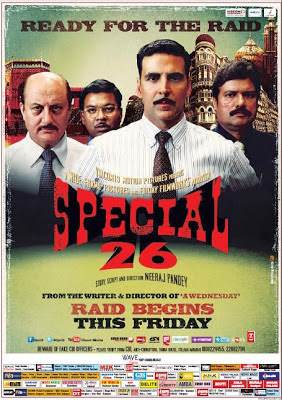 It's been a while that I have reviewed a film. It's not due to a lack of watching films (surprisingly!) but rather a lack of cinema that inspired me to review it. Thankfully after the disaster called 'Inkaar' last week, along came 'Special 26', literally begging to be reviewed.

Set around 25 years back, the story based on true incidents follows the exploits of a group of con men who would 'raid' ministers of businessmen posing as CBI or IT officials. The cases would usually go unreported as the victims were usually hiding black money. The premise of the story is good enough but when you get a set of classic actors like Akshay Kumar, Anupam Kher and the very talented Mr. Manoj Bajpai together, you can not possibly go wrong. 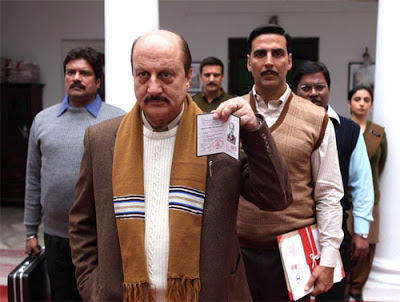 Each actor has played his part to perfection. One can not help but marvel at the phenomenon called Anupam Kher. His mere body language speaks volumes, in a micro second, as he transforms from the leader into the follower during a particular raid. Manoj Bajpai, my all time favourite plays his part of the 'real' CBI agent to perfection. His characterization has been well thought through with little incidents to show his conservative and old school thinking. He is, alas, not the shining star in this film but he holds his own.

The direction is splendid and editing tight. At no point during the film does one's attention wander or you be tempted to look at your watch.

A must watch. You are sure to come out of the hall laughing. An absolute entertainer.