Fifty Shades Trilogy - Life is not black or white

When I read that the Fifty Shades trilogy had outsold Harry Potter, I felt a wave of revulsion ride through me. Hah, no wonder they say porn is the largest industry in the world, I thought. What do people know about literature and the art of storytelling. I did not really know what the books were about, just that they involved some weird sex stuff. So, here I was happily ignoring their existence when V suggested I give it a read. She insisted that the books were actually interesting from a story build up point of view and that I was jumping to conclusions. She even loaned me her copy. And I am glad she did. 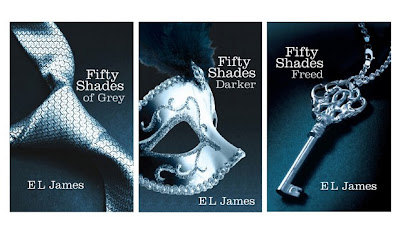 I have wrestled with the idea of doing a review of the series and more often than not, decided to steer clear of it. For starters, in India, sex is a taboo subject and I will probably be judged morally for writing this. Also, I know that my blog is followed by some of my family and this may embarrass them. But the writer in me fought back. If I am true to my art, I can be unbiased about this and I should be able to write about subjects that make me or other people uncomfortable.

Disclaimer: Dad, you may want to stop reading here :)! Got the stomach for it? Well, here goes.

I read Fifty Shades of Grey on a flight from Bangalore to Delhi, all the time trying to hide the cover from roving eyes of my co-passengers. By the time I was halfway through, I couldn't care less who saw me. And the first thing I did when I got home was to order the next book in the trilogy from my library. I haven't read Fifty Shades Freed yet so this is just a review of the first 2 books (but they are now following a predictable path and thus can be extrapolated).

The trilogy traces a few weeks in the lives of an ordinary young girl Anastasia and a super hot billionaire Christian Grey. So, lets get the bad stuff out of the way. Christian Grey was adopted by his kind parents when he was a young boy but prior to that he had a traumatic childhood. His birth mother was a drug addict and a prostitute and he was repeatedly assaulted by her pimp which leaves physical and mental scars on him. His psyche was so terribly affected that his personality was shaped into being a control freak, afraid of emotional attachment and deviant sexual preferences.

Contrary to the hype, this book is not about the sex. After the initial pages, you may even find yourself flipping over those pages to get on with the story. Which is where I believe that the trilogy scores. The books are about two individuals. Each perfect and imperfect in their own ways. The story builds on how these two find each other and help the other accept and love their own selves. The story at the end of the day, is about love. And it doesn't take a genius to figure that out, just someone with an open mind.

The hero of the books to me, is the characterization. The author (a first time author that too) has done such a phenomenal job with the characters that once you are through with the books, you feel like you know them personally. You know how they will react to situations and what really moves them. And having tried a bit of fiction myself (and failed miserably), I can vouch for this being the toughest part of writing a book.

Yes, the editing leaves much to be desired. After a point one gets tired of how many times they gasp or bite their lower lip or roll their eyes. But lets not get all literary puritanical on that. Especially when we applaud people like Rushdie and Roy when they write 3 pages on how green the tree was!!

All in all, the trilogy may not be the masterpiece of the century. But it is definitely not the trash that it has been made out to be. What you take out from it, really is a function of your own mind. I quite liked it. So sue me.

NOTE - I read the final part of the trilogy, 'Fifty Shades Freed'. and almost detested it. She should have stopped at 2.
at November 01, 2012