"Just one glance" - My entry for the Get Published contest

She watched the ants slowly crawl past on the pavement. A lone rat would peep in from a crack in the stones every now and then and dive back in as she would shoo it away. If it wasn't sad, it might even have been funny, this little tryst with the fauna of city life. A drop trickled down her face. She looked up at the sky and let the rain drops fall on her face and wash away the tears. It was getting dark now. But she sat there on the pavement across the road, with her eyes never wandering from that staircase that she hoped he would come down from.

If you asked her what she was doing there, she probably wouldn't have an answer. It was quite pointless, waiting for hours in the dark, drenched to the bone, just to get a glimpse of his face. It seemed silly, yet never for a moment did it seem wrong. Passerbys wondered about this girl sitting under the tree, seemingly muttering a prayer under her breath. A few even offered her help if she needed any, but she just smiled benignly shaking her head. No one could help her now. Not them, not him. No one.

She could feel her legs ache from sitting in the same position for so long. But it seemed like too much of an effort to stretch. People had started to come out. She kept praying, hoping that he would too. Just once. It was pitch dark now. She gave a little shiver, from the cold or the thought of sitting alone on a dark alley, she didn't know. But it was too late now. Perhaps he wasn't there today. Perhaps it wasn't fated to be. She slowly got up, her legs almost giving way under her as she did so, still praying under her breath. And just as she was about to turn back, like a vision she saw him. He looked happy. As he turned his head towards where she sat, she jumped behind the tree, not wanting to put him in a spot. She watched him put the car in gear and slowly ease into the traffic as he drove away.

And she smiled as she walked away in the other direction. It didn't seem so dark anymore.


This is my entry for the HarperCollins–IndiBlogger Get Published contest, which is run with inputs from Yashodhara Lal and HarperCollins India.

Email ThisBlogThis!Share to TwitterShare to FacebookShare to Pinterest
Labels: love

There are some films that there is no point in reviewing. It is because they are just so superlatively fabulous that a film critic runs the risk of sounding redundant. Taare Zameen Par was one of them. As were the Dark Knight or Forrest Gump. But  Barfi takes this redundancy to whole new level. Barfi, in its own simplistic way redefines cinema, whether Indian or not.

There are times when you look at a dish that looks deceptively simple, yet you know from the burst of flavour in your mouth that there is a huge amount of complexity that went behind making it. Barfi is that dish. A beautiful story, told in a simple narrative and brought together to a touching conclusion.

I still am not sure what I love most about the film. Could it be the parts played by the 3 protagonists to perfection? Ranbir doing a Chaplin perhaps better than Charlie himself, bringing humour to highlight tragedy and serious issues. Priyanka who helped you forget the superstar that she is in an act as believable as it was endearing. Or the narrator, a new comer who makes you feel for her as she pines for her love all her life.

Or maybe I liked the direction best. The way the film runs between stories. How it moves from a detective novel to a love story to a family drama. Perhaps it was the editing. Or the cinematography. Or maybe even the background score which lifted the film where it needed to and sailed it along.

I don’t think we need to have award ceremonies this year. All categories should be automatically gifted to this film. If this film can not win an Oscar, the Oscar’s should shut shop.

In a day and age where one struggles to find the meaning of love and perhaps the very existence of it, Barfi tells the tale of love so pure and so true that you can not help but believe. Love, whether it be unrequited or reciprocated, lost or found, is the true hero of this film.

Rating: Off the charts

One word can start a tale
'Coffee?' he asks one day.

Three words can be the balm
Of a heart gone astray.

Four words can herald dawn
'There is always tomorrow' you see.

Five words still dare to hope
'Tell me it's not true'

Six words, finally wise
'It was never meant to be'

With all the happiness life bestows
May you always pine for me.

Buddhists believe very strongly in the concept of Karma. They believe that every single action of yours, whether good or bad, helpful or hurtful, earns you merits or demerits. And life has a way of settling scores. If you have done something that hurt someone, even if that wasn't your intention, you will pay back by suffering a hundred times over.

This concept was explained to us by our guide Sonam while we were travelling in Bhutan, when asked about what he felt about the Chinese invasion of Tibet.

Over time, I have realised that I believe very strongly in Karma. That life comes a full circle. That good things eventually happen to good people. And vice versa. The only catch is, who decides whether you're good or bad??
at September 16, 2012 1 comment:


My quick weekend trip to Amritsar this month was probably one of the most gluttonous ones. We ate SO much...and such amazing stuff that I haven't found anywhere else in India. My latest article on Rediff is a quick travel guide for a weekend trip to the city. What to do and ofcourse, what to EAT!!! 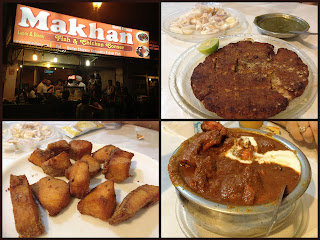 A realisation, slowly has been creeping up on me. That I had it figured out all wrong till now. I never could do things for appearances sake or because it would look good. I only do things when I mean it. So every single action of mine has emotion behind it, not routine. And I felt that the people who truly love me or know me, will know that. I spend all my time trying to balance things, balance people. So that I can do whatever is in my capability for people that I love equally and not play favourites. Somewhere down the line that got translated into me being misunderstood as being selfish and doing things when they suited me.

It's unsettling to realise that there is probably only one person in this world who understands me. Maybe my theory was wrong all along. Maybe it pays to look good. I never bothered to get credit for most things I do because I thought that if the person I'm doing it for is happy, then its payback enough.

I may not be the perfect person in your eyes, maybe far from it. But I try to be the best I can. I wish a handful of people that I spent my life loving saw that in me.