Shooting at the Wisconsin Gurudwara 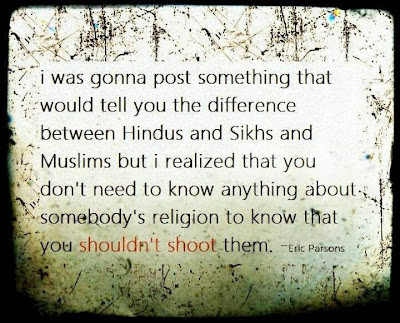 The recent shooting incident in US at a Sikh Gurudwara leaves me saddened. Not enraged, saddened. And what hurts me more is the reaction from pockets of the Sikh community post the incidence. People seem more upset that this was a case of misunderstanding and that the gunman actually was looking to kill a few Muslims.

Uh okkk. So its a sin to kill our kind but ok to kill others? What sort of tolerant religion are you boasting of being a part of? I know that post 9/11, the Sikh beard and turban has been targeted by more ignorant groups of fascist westerners. And yes it is wrong. But it is as wrong as targeting every single Muslim in the country for what a small group sitting in Afghanistan did.

I don't know how many times I will shout this from the rooftops and I wonder if I am the only one who feels so. It is NOT alright to kill innocent people. I don't care what religion or country or ethnicity they belong to. I don't care what a group of people from their community did to a group of yours. If you retaliate like this, there is no difference between you and that gunman. Both of you are being ignorant. Ignorant and intolerant.

I am not a religious person. But I am a sensitive one. The batman tragedy last month was as shocking to me as this one. I am no saint either. I am sure there are many layers of discrimination that I practice without even being aware of them. But I'll tell you one thing for sure. I will not stand by your side when you act like an extremist. Regardless of who you are.

I prefer not to propagate any religion but now that we are on this topic, let me make an exception. Sikhism was created by Guru Nanak Dev Ji in the 15th century as a reaction against discrimination within the religions of Islam and Hinduism. The basic tenets of Sikhism preach that there will be no caste/ class system in this religion, that all men are equal and to be respected and that ritualism is not to be followed but one should meditate to find inner peace and god. The essence of Sikh teaching is summed up by Guru Nanak in these words: "Realization of Truth is higher than all else. Higher still is truthful living. Sikh teaching emphasizes the principle of equality of all humans and rejects discrimination on the basis of caste, creed, and gender". All of these tenets are now polluted with time and with the interpretation of a few extremists who claim to own the religion. Unfortunately, as in every religion, what we see today is a mere shadow of what Guru Nanak had created.

When will we all learn?

I dont think by trying to educate people on what SIkhism is, 'they' are saying it is ok to kill muslims.
You and I have not been affected by violent acts of discrimination in the west in the aftermath of 9/11, where the hate crimes were just that-HATE CRIMES. Not politically motivated by a party or person in power. It was the reaction of the general public in anger to what they felt was the enemy within.
I think in the terrible circumstance if one of our loved ones was targetted in these attacks since 9/11, we too would want to clear or educate people on what sikhism is as these are cases also of mistaken identity.

No one is saying killing anyone is ok, muslims or sikhs or hindus or christians. And you too just did what everyone is trying to do, educate people about what Sikhism is all about. That's all it is. an attempt yet again, to inform people that just because someone looks a certain way doesnt tag that person a terrorist. eg, calling an indian in London a 'Paki' will make u cringe-does that make u anti-pakistani? I dont think so. IMHO

I wasn't talking about anyone in particular... this was a general reaction across blogs and social media...of people we don't know personally. I agree with you and am against Hate Crimes of any sort. Having said that, I personally think that the mistaken identity is not the tragedy here...the massacre of innocent people is.