Gangs of Wasseypur- You want to see their guns?!

Watching a film after 3 weeks of its release is a dangerous proposition. You probably have already heard reviews, seen facebook updates about it and have a vague opinion about the film. But don't let that stop you. Go watch it anyways and have your own opinion. I'm glad I did.

If I had to review Gangs of Wasseypur in one word, it would be 'unapologetic'. Critics berated the film by saying that it was too chaotic, too many stories flying around with just gore and abuses for entertainment. I wonder if we saw the same film.

The film traces the lives of three generations each with their own enemies and struggles. If you pay attention, you will realise that there are only 2 groups of enemies..one the Qureshis and the other Ramadheer (who uses the Qureshis to get rid of Khan), the local don/politician. Each character has been cast with precision. To the extent that Manoj Bajpaye's father Shahid Khan actually looks like him. Every actor does justice to their character. Whether it is Durga the seductress, the different characters of Danish n Faisal or the hired assassin. 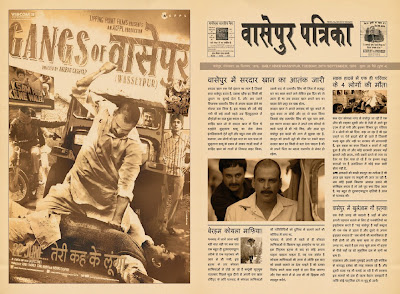 Three actors deserve special mention. First ofcourse the fabulous Manoj Bajpaye. I must confess, I have always had a soft corner for him. He has a quiet intensity to him which is so sexy! Though this intensity was polished in Zubaida, in GOW it is raw and what may be called 'ghaati'. He portrays the role of Sardaar Khan, ruthless with enemies, a womaniser yet one who is scared of his wife's temper and a man who lives with only one purpose in life- revenge. The second actor is Shahid Khan, Sardaar Khan's father. Though the character was given a small role, he had such strong screen presence that he stays with you till the end. Whether it is the tenderness with which he wipes his wife's brow after almost getting killed or the raw rage when he beats up the coal mine's guard- a fantastic actor proves himself. Lastly, my favourite performer was Richa Chadhha who plays Sardaar Khan's first wife Nagma. A fireball who retorts back to policemen in their own language and tells her husband where he can get some action when she's not interested, Nagma radiates strength through the film.

Anurag Kashyap is a gutsy man. He doesn't blunt the edges or apologise for his art. Likewise, the film is sharp, edgy and gory in parts. Yet even the toughest critic can't call it boring. Yes it is abusive, but dear viewer spend a day in the region where this is set and you'll realise they don't exactly shower flowers while talking.


The soundtrack had me tapping my feet throughout. My favourite being Kehke lunga and Womaniya. The songs are hilarious. As is the film. In my opinion the film wins because it doesn't take itself too seriously. It jokes, kids and finds humour in every frame.

Love it or hate it, GOW is not a film you can ignore. Don't be deterred by the critics who shout violence and foul language. Omkara was abusive but nothing short of epic. As is this. Watch it. Now. Before the second one gets released.

Your write up is good but i hv seen the film 1st day 1st show, its not that great. In fact i always see films 1st day before any one else comment about it and i start building opinions about it, i go and watch the film. GOW is just a publicity stunt. The great thing about Anurag is that he has divided the audience in two parts. There are people who likes Anurag's films because they are off beat, different from the league. But it is not necessary to show negativity to show something different. Even Guru Dut made different films, even he showed the realities of life and society, even he showed prostitution and red light areas but there is always a proper way of expressing it. The film is not a hit but it is popular among the classes, because these are the people who have these thoughts but because of the fear of social norms are unable to express it. For masses its very normal. Hence masses like Rowdy Rathor and Housefull 2. I dont say that these films are greatbut atleaset it has a high entertainment quotient. GOW has created a great hype before release but did it live up to the mark. I was very impressed by the promos but the film did not live up to that mark. You saw the film after 3 weeks may be your mind followed Newton's 3rd law of equal and opposite reaction. You heard so much negativity that you found it very good.
In short i did not like the film but yes your article is really good. Looking forward to read more from you.
----------------Sanjay Tiwari
www.bollywoodhelpline.com

Harnoor, you saw the film after 3 weeks and may be your mind followed Newton's 3rd law of equal and opposite reaction. You heard so much negative about the film that you embrace it with lot of positivity.
I see the films 1st day 1st show so that i dont build any biased opinion. I was very impressed by promos but the film did not reach even half of what was expected.
Any way in short the film was not great but your writing is good.
--------------- Sanjay Tiwari

This we call the bawaal movie.....even 100s of Rowdy Rathods and Dabangg would gasp for breath before movie like GoWI and II. Part I was like bullet started, and Part is the the same bullet when it reaches climax. Yes, we certainly missed Manoj Bajpayi though all performances in part 2 were great and electric...just like electric piya! Movie ho to aesi! Cheecha leather....Best of the year.