In a continent known for its range of delicious cuisines and countries known for their mediterranean influences, my foodie expectation from Spain and Portugal ran high. 15 days of tasting local fare and noting the subtle differences between the tastes as you move farther south was an experience in itself.

Madrid, being the capital, served fabulous food. Cosmopolitan and more suited to touristy tastes, Madrid had something for everyone. The Paella here (the famous local rice dish usually made with seafood) failed to impress. A little too dry and the sea food staring at us (literally) in the face was a bit much. We also tried the Gaellic Octopus stew (full marks for courage) at Maceiras and though we washed it down with Sangria, it is safe to say that it is a taste I don't miss. As we were staying at the Westin near Huertas, we did venture into the Writer's District and had some fabulous Pasta. But our best meal in Madrid (besides the multicourse meal in Westin) was at a local restaurant called El Rincon de Jaen 2 near the Bullfighting ring. R's Spanish friend took us there and finally we experienced the spanish experience of getting free food for every 2 drinks we ordered. A word of caution - if you order the platter of fried sea food, it may have some creatures that you just dont want to see in their complete form let alone bite their heads. Another great experience was drinks and tapas near the Plaza Manor in a popular Tapas bar called Casa Labra where the fried fish was absolutely divine!! And ofcourse ending our food with the very tasty Churros (fried flour sticks dipped in molten chocolate) at the 19th Century Chocolateria San Gines.


Our second stop Granada is more famed for Alhambra rather than its food. We tried the Paella here and disliked it as much as we did in Madrid but we also discovered that the Spanish do a great plate of Croquettes, breaded and fried rolls of minced meat. With an apartment of our own in Granada, we managed to have most of our meals at home and frankly, the packaged Haldiram Dal Makhani with Tortillas was like a breath of air to a drowining man!! 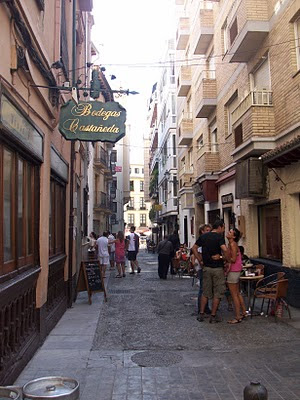 Seville thankfully changed our minds about Spanish Food. By far the most superior city of the 3 in terms of food, the Sangria here reigned supreme as well. We discovered that we liked the lime flavoured Sangria a tad more than the one made with Apples. Walking around the tiny cobbled lanes of Seville had a charm of its own. We would often sit at a cafe on the sidewalk to sip something or just have a Gelato. Thankfully, our apartment was quite close to the Cathedral and Bullring so we walked most of the time.

But our best culinary experience (probably in the entire trip) was at a famous Tapas bar called Bodegas Castaneda. With only standing room available, they changed our mind about Paella with the sumptuous Chicken Paella and won our hearts with endless plates of free food and very animated bartenders.

The food in Portugal was more about grilled meats with crispy skin soaked in jus. The suckling pig was fabulous and the grilled prawns succulent. But the accompanying Piri Piri sauce was just a very very spicy olive oil - nothing like the fabulous Piri Piri we get at Big Chill. And yes, dont even bother trying the white sangria. Its like liquid crocin.


All in all, its good to be back home! To kick up my tired feet and rest and to satisfy my palate craving mattar paneer, daal and chicken curry. Europe lives up to its reputation of being beautifully made and preserved. The people are elegant and the food interesting. An experience to hold dear in memories.
at September 19, 2011