Spain may not be one of the top choices for a European vacation but it doesn't fail to charm. When you talk about Spanish tourism, besides the night life in Madrid and Barcelona, the first things that come to mind is Sangria, Paella, Bullfighting and for the more well read - Alhambra.


After Madrid, our second stop in Spain is Granada. A comfortable 4.5 hours drive from Madrid, Granada is located at the foothills of the Sierra Nevada range. The drive was uneventful in the begining but eventually the dry and barren landscape gave way to 200kms of olive farms. One can only stare in awe at the undulating hills with their neatly lined trees (as short as shrubs) which stretch for as far as the eye can see. Granada is home to the popular world heritage site - the Alhambra, the fort and the palaces of the Moorish Dynasty. Spain has a bloody history....the Islamic Moors who ruled the southern provinces and built beautiful cities were literally massacred and driven out by the Christian rulers.


Alhambra is a gorgeous city built during these times. The 800 year old fort has palaces built by the Nasrid Dynasty. One may buy the cheaper Generalife tickets or splurge and get the all inclusive tickets. Your ticket will have a specific time and date for entering the Nasrid Palace and you must make sure you are at the venue atleast half an hour before that else you will not be allowed inside. Alhambra is sprawling and you will need the better part of your day if you want to explore it at leisure. We took the first tickets of the day at 8:30am (prebooked online) and were done only by 3pm. The palace itself is beautiful and built with tender loving care. The thing that struck me most having seen plenty of Mughal and Rajput palaces is the intricacy of carving all over the walls. The work is precise and beautiful. Another thing that struck me as different were the ceilings of the palaces which were made with wood vis-a-vis the marble or ornate ceilings we normally come across. The only christian palace in the complex, that of Charles was almost an eyesore in comparison but an interesting architectural plan with an outer square structure and almost a colosseum like round courtyard in the centre. 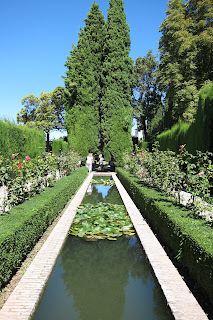 But what I shall most remember of this stunning city are the gardens (GeneralLife). Acres and acres of flowers, gardens and waterways that flow into each other, this is one place that has so many nooks and corners that you can lose yourself in. Flowers of every colour, fountains with cascading waters and a hush in the air, here is where the crowds fade away and it is just you and the Alhambra having a conversation in whispers.

Absolutely exhausted after the Alhambra, we decided to take the day easy. The next day, we went out to explore the Catherdral in the city, popular for its renaissance and neo gothic structure. This is an absolutely must do in Granada. The Cathedral is built over a former mosque and the outdoor structure doesn't give a hint of the opulence that the interiors have in store. The Cathedral is absolutely breathtaking!! There is no other way to describe it. A humungous building with ceilings so high that that my neck is still aching with looking up so high, it has ornate gold artwork and paintings all over. We spent an hour just sitting in the pews and taking in the entire aura of the place. I doubt that a church more beautiful than this exists anywhere else.

As our time in Granada comes to a close and we are off to Seville tomorrow, I shall look back at this tiny town with a smile. I will certainly not miss the cobbled stones which are a pain for taking baby strollers on but I can say for sure that Granda has the best Paella I have had till now (thankfully chicken and not seafood with octopus legs sticking out) and lip smacking Sangria. And yes, finally we discovered an amazing Tapas bar where we got a free plate of food for every 2 drinks we ordered. Considering that we ate our fill, it is safe to say that we walked out of the bar at 4pm with more than a swing in our step!!
at September 11, 2011