Never seek to tell thy love,
Love that never told can be;
For the gentle wind does move
Silently, invisibly.

Soon as she was gone from me,
A traveler came by,
Silently, invisibly
He took her with a sigh.
at August 31, 2011 1 comment:

Email ThisBlogThis!Share to TwitterShare to FacebookShare to Pinterest
Labels: poem

All my bags are packed…I’m ready to go…

I’m almost standing outside the door! Finally our annual trip to foreign shores approaches. What with the recession and a pregnancy to break our routine, last year the farthest we could manage was Lakshadweep. Thankfully this time we gathered our courage (and you need tons of that to travel with an infant), packed up the little bundle and we’re off to Europe in 2 days. Spain and Portugal beckon.


This trip should be a first for many things. A first in Europe,  a continent I wish to explore at leisure. A road trip across two countries. Nyda’s first air travel and that too long distance. Lets see how she fares. And our first long vacation with her. It should be a new experience suiting your schedules to the ever changing whims of a 5 month old. We both are used to travelling light and walking around the town all day to soak in the place. Well, one thing’s for sure, we can’t travel light this time !! Her luggage is more than both of ours combined.


But with the angel that she is and how she’s used to strolling around in her pram while mom shops or does other stuff, I think this should be a breeze.

An open letter to the Common Man

You, the nation seem to be up in arms. And theoretically, the cause is great. Corruption is what can gnaw a society from within and make it hollow. Bit by bit, it can tear away at the moral fibre of our culture. Yet, would you, just for a moment hit the pause button and step back? Do you know what you are supporting? Is Anna a symbol of relief from the general frustration that you have from the system? And more importantly, is your frustration more to do with the ‘developing’ part of our nation than the Jan Lokpal Bill (how many of you have read it??).

As a citizen, I want to protest too.

The sentiment in your hearts is pure. But is the cause all encompassing? Political corruption is of very very little relevance to me in light of all the above. It is important, no doubt. But far less important than getting some order in the chaos of a country I love very much. Do not think for a moment that corruption does not exist in western countries. It does and at a much higher level than these penny foolish ones. Here is an interesting read about Corruption in the USA and how it affects the common man.

What I need is a couple of strong administrators who can ensure that public systems work well and efficiently. And I do not think changing the government is the answer to any given problem (do you really think the others are better administrators or lesser corrupt)? Empowering able statesmen to lead us is what our democratic system does. Let them lead us. Do a course correction for them if you feel they have strayed, but do not think that you sitting in your house can run the country better than the economists and highly capable people that you have elected.

Marching and fasting are both good for your health. Do carry on if you please. But on the side, next time you board a train with an unreserved ticket, do not try to bribe the TT to get his berth. When you jump a traffic signal, kindly do not wave a Rs.100 note at the policeman. Don’t use your ‘jugaad’ to get free tickets to the Formula 1 races coming to India and for the love of god, please do not slip a note to someone the next time you want to cut a queue. The next time you want to stop corruption, stop yourself first.

What are we doing to our women? I'm biased, but Indian women are the most beautiful in the world. As mothers, sisters, daughters, colleagues, wives and girlfriends - we love them. Can you imagine life without the ladies?

For now, i want to give Indian women five suggestions to reduce their stress levels.

One, don't ever think you are without power. Don't take brickbats from your mother-in-law. Be who you are, not someone she wished you would be. She doesn't like you? That's her problem.

Two, if you are doing a good job at work and your boss doesn't value you - tell him that, or quit. Talented, hard-working people are much in demand.

Three, educate yourself, learn skills, network - figure out ways to be economically independent. So next time your husband tells you that you are not a good enough wife, mother or daughter-in-law, you can tell him to take a hike. Or if not economically independent then let him value what you contribute to his life. Leave his house and the kids for him to take care of for a day, that should be the end of the argument!

Four, do not ever feel stressed about having a dual responsibility of family and work. It is difficult, but not impossible. The trick is not to expect an A+ in every aspect of your life. You are not taking an exam, and you frankly can't score cent per cent (unless you are in SRCC, of course). It is okay if you don't make four dishes for lunch, one can fill their stomach with one. It is okay if you don't work until midnight and don't get a promotion. Nobody remembers their job designation on their dying day.

Five, most important, don't get competitive with other women. Someone will make a better scrapbook for her school project than you. Another will lose more weight with a better diet. Your neighbour may make a six-dabba tiffin for her husband, you don't - big deal. Do your best, but don't keep looking out for the report card, and definitely don't expect to top the class. There is no ideal woman in this world, and if you strive to become one, there will be only one thing you will achieve for certain - stress.

So breathe, chill, relax. Tell yourself you are beautiful, do your best and deserve a peaceful life. Anybody trying to take that away from you is making a mistake, not you. Your purpose of coming to this earth is not to please everyone. Your purpose is to offer what you have to the world, and have a good life in return. The next time this survey comes, i don't want to see Indian women on top of the list. I want them to be the happiest women in the world. Now smile, before your mother-in-law shouts at you for wasting your time reading the newspaper."

A fresh perspective on world economics. Below are the nations with the highest debt in the world (absolute as well as % terms with respect to GDP), posing a threat to the global economy. Even though rising demand in countries like India and China can help cushion the spiralling effect of this, it is in everyone's best interest that the economies stabilize soon.

My latest article on Rediff talks about the little things one can do to make a friendship live forever. With best friends who’ve been with me for 24 years, we must have done something right!!

I was surfing today and chanced upon some snaps of absolutely delicious Hazelnut Chocolate Cakes! The Pavlovian Dog in me started drooling and I couldn't hold myself back from rushing to the kitchen to bake some chocolate brownies which I instantly devoured with Vanilla Ice Cream. Here's my quick recipe for Chocolate Fudge, a gooey chocolate desert best topped with ice cream. 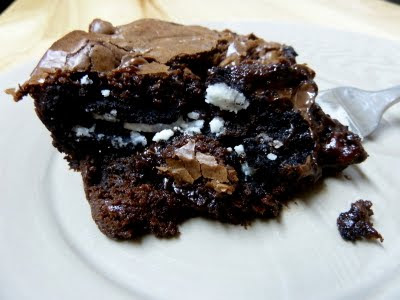 Method:
1) In a baking dish, mix maida, 3tbsp cocoa, half the granulated sugar and baking pwd.
2) To this, add the milk and oil and stir to make a batter.
3) In another dish, mix the pwd sugar, rest of the granulated sugar and cocoa.
4) Sprinkle this mixture above the batter.
5) On top of this pour the boiling water.
6) Bake in a preheated oven for 35 minutes and let it stand for 10 minutes after that.
7) Devour hot!!

If you want more fudge and less brownie, make this in a flatter and bigger dish. Else, a deeper and smaller dish will give you more brownie and lesser goo.