Oops I did it again!!

When I was watching the latest  Harry Potter film - The Deathly Hallows part 2, I loved it! In the first half, I was literally sitting on the edge of my seat in excitement and I loved the special effects in the second half. So I decided that to do justice to the review, I'll go back to the book and read it again and get an idea of where the film stands. Alas, BIG big blunder. 4 pages into the chapter, I realised that I shouldn't have bothered. The mighty pen wins again.

Like all Potter films, this review shall be given from both the viewpoint of muggles (Ms) who haven't read the book and pure-bloods (PBs) who have. One of the most awaited films of our times, this last film is the closing chapter in the Harry Potter series. When the book came out two years back, I was absolutely blown apart as to how each loose string that Rowling had left in earlier books was tugged at and expertly tied up at the end. Unfortunately, in doing so, the books which earlier used to be just 200 pages or so started becoming thick encyclopedias of four times that many pages. But the length of the film remained constant. Thus, the directors were faced with the mammoth task of fitting it all in and allowing the viewer to make sense of it.
The last 2 films have been racing ahead of the viewer in order to cover it all, often leaving muggles confused and disoriented. PBs on the other hand, know the intricacies of the plot and are wondering why it has been simplified so. Though the films, like the books, have been maturing over the series, with the earlier ones being childish and becoming more sinister as they grow up. Yet, the magic of this world that one experiences in the earliest parts is somehow lost.
The special effects ofcourse are fabulous. The war scenes could rival any gladiator film and I particularly like the shot where HP walks out in front of the entire school and faces Snape. Snape is given his due, with the flashback done brilliantly. Also of note are the scenes in Gringotts, the roller coaster ride almost a 3D effect even in 2D. 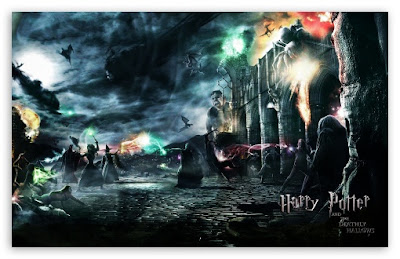 The problem is in its diversion from the book. As I lamented before, when you have such a fabulous script to follow, why oh why would you stray? Harry's turmoil of whether to chase Horcruxes or Hallows is not even mentioned. Complete scenes are edited out and some randomly inserted like Neville standing in front of thousands of death eaters and confronting them. Neville for some reason has been given too much screen space in the film, even more than Ron and Hermoine. Fred and George haven't been given their due in any film and thus when we see one of the twins finally slain, not one eye in the theatre is wet. Bellatrix dies too easily and the final duel is far less exciting than the one where Dumbledore had duelled Voldermort in the ministry of magic. I could go on and on but its of no use. For PBs who enjoyed the film but feel something is still missing, go read the book again. Let the last bite leave the last impression.
A very enjoyable and racy film. Should be watched in a theatre. But alas, not quite what it should have been.
Long live Rowling.
Rating: 3.5 on 5
Paisa Wasool Moment: When McGonagall orders the knights to guard the fort and then grins in glee saying "I always wanted to use that spell" :)
at July 22, 2011

"This review shall be given from both the viewpoint of muggles (Ms) who haven't read the book and pure-bloods (PBs) "..hehe..nice way of distinguishing :)
I fall under the 'PB' category but somehow i cudnt manage to watch the movie yet..hopefully will be seeing it soon.

Let me know what you think once you see it....

I finally got to lay my hands on the movie. Regarding what u said abt "Harry's turmoil of whether to chase Horcruxes or Hallows", i think its been covered in part 1 of the Deathly Hallows, but yes i do agree that the movie misses out on many finer details. Adding to that i dint find the movie as breathtaking as the initial parts but then again as u have said, the novel's volume has just swelled with every edition. I loved the effects and for an unimaginative guy like me the Harry Potter movies showed me things i cud never hav dreamt of. So the movie will hav its place in my heart and will coexist with the place occupied by the novel. A classic example to prove that movies and the books they are based do not compete but are made to coexist.

I like what you said about the books and the movies coexisting...I agree...neither can replace the other...