Hangover 2 - the craziness knows no bounds!!

All those people that turn their nose up at Hangover 2 and say that its nothing new....tell them to go hike! The only problem with this film is that it comes in after the crazy hit Hangover and thus our expectations are already high up there. Which is fine, because this film doesn't fail to entertain!! 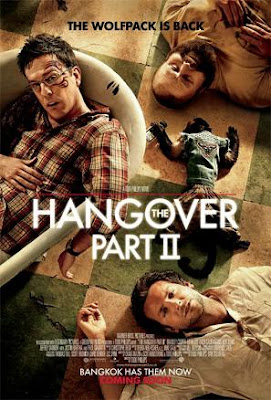 Alright come on....it is not a wonder that the story is predictable. I mean there are only so many ways to depict a hangover and blackout! Thankfully, the similarity ends there. The movie takes off 2 years after where we left the 4 mad men last time. This time, it is Stu the dentist (yes the same one who lost a tooth and married a hooker:P) who is tying the knot all the way over in Thailand!! As expected, Phil and Doug are making the journey across and as an after thought, Alan is invited to join them as well. And thank god he is.

What follows is complete mayhem. Even a strict vow on Stu's part not to have a bachelor party or any alcohol doesn't help and the wolfpack finds themselves in situations crazier than last time (if that is possible)! There is mafia involved, women, dancing, tatoos, a monkey who likes to smoke, a missing finger and another special appearance by Mike Tyson.

Each character plays their part perfectly but as usual, it is Alan who takes the cake. He is just fabulous as the mad guy in a zone of his own! There isn't a dull moment in the film with him around!

Go watch the film. Or in the least, get the DVD. Some popcorn, a drink, dim lights and your Saturday is set (which is the only way we manage to watch movies now with a 2 month old!!). Its a roller coaster ride you wouldn't want to get off from!

Rating: 4 on 5
Paisa Wasool Moment: When the dancer in drag looks incredulously at the 4 who thought he was a woman and demands, "Why do you think this place is called Bang'kok'???"
at June 14, 2011