Sanjay Leela Bhansali is in a league of his own. When you start your career writing a movie like '1942 A love story'....move on to making the very touching 'Khamoshi' after 2 years....prove that you are not a one movie director by releasing the absolutely beautifully made 'Hum dil de chuke sanam'...and then further hone yourself with 'Devdas' and 'Black'.....not only you but the world then knows what you are capable of! Except for Sawaria, each movie made by this man has been nothing less than iconic. And when you take an actress like Aishwarya Rai who has been repeatedly slandered for being such a plastic heroine and make her deliver absolutely breathtaking performances like these, you know you have got to give the director some credit! 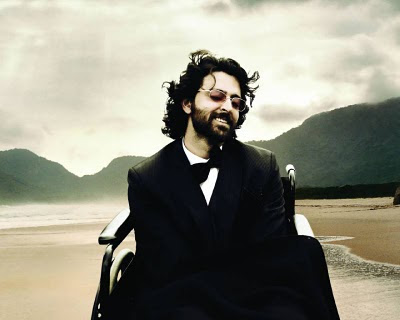 Guzaarish comes with the heavy expectation load of Black on its back. Another Bhansali film with the main protagonist severely disabled (in this case, a quadriplegic - paralysed from the neck down) and the dark hues that characterize his films of late. But no, like each of his films, this one stands firmly on its own two feet, refusing to be compared to any other and stands tall.

Hritik Roshan plays the very successful magician who loses his best friend, career, mobility and almost his life in a magic act gone wrong. Refusing to let life beat him down, he becomes a radio jockey, a favourite of all in Goa. He is taken care of since the past 12 years by Aishwarya Rai Bachhan who plays his nurse. Hritik does an exceptional job with his role, portraying the helplessness of not being able to move or live with dignity inspite of having an especially sharp mind. Look out for a particular scene involving a fly and also the way he sits on his wheelchair...the way his shoulders stoop, make him smaller than he really is. Phenomenal. Aishwarya chooses to hold her own and delivers a performance par excellence. Part nurse, part friend, part secret lover...she is the outside world to him. Dressed in beatiful long skirts and dresses, often with a tasteful scarf, she not only looks pretty, but acts and even dances with elan. Some other performances worth a mention...or even more are by Hritik's friend Devyani who is also his lawyer, his doctor played by Suhel Seth, Rajit Kapoor as the prosecutor and many more. But equal credit as the main protagonists must be given to Aditya Roy Kapoor, an upcoming actor and VJ who plays Omar Siddiqui, an amateur magician who wishes to learn magic from Hritik. 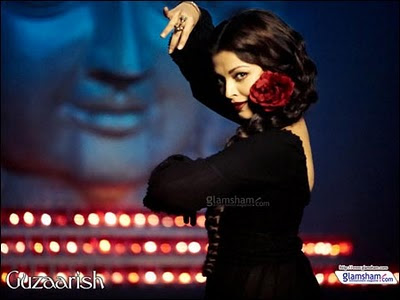 Set in Goa, the film gives a glimpse of the portugese town unlike ever done before. The stately but delapitated villa in which Hritik lives, the lush green fields that they drive through...all of this allows the viewer to see this beautiful town through the eyes of a local and not a tourist.

The only flaw in the film is a stretched out farewell party thrown by Hritik for his friends that seems like a deliberate tear jerker. But you forgive Bhansali of these 10 minutes for the other 99 minutes of pure genius that he lets you be a part of. It is not a sad portrayal of a disabled man's life. Instead, it is almost a celebration of the life he lives, his quick humor and wit bringing more smiles than tears.

hmm. sounds like it is inspired by the spanish movie I saw sometime back with my fav Javier Barden-an actor par excellence-'The Sea Inside'. In the new film The Sea Inside, in which he stars as Ramon Sampedro, (a real life character) a Spanish sailor left quadriplegic by an accident and fighting for the right to die.
It was a truly beautiful movie!
Im looking fwd to watching this one now.

its a very good movie...
i loved it... also the pain that hritik goes through all night due to the water dripping on his head