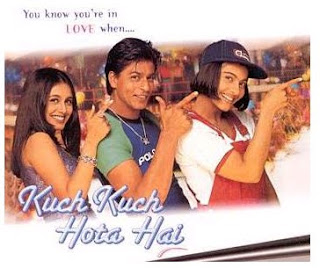 This is a controversial post to write. In a country where Shahrukh Khan is almost god and Kuch Kuch Hota Hai has something of a cult following, to dig it up after almost 15 years and tear it apart gives me goose bumps. But a woman's gotta do what a woman's gotta do.

The problem arises from the fact that I myself am a self confessed member of this cult. When I was seeing this film for the 21st time yesterday (yes, I need a life), it finally hit me on how incredibly chauvinistic this film really is. So if you havent seen the film (how???), let me give you the lowdown. Girl and boy are best friends in college, girl loves boy but boy falls for mini skirt clad hot chick but only after she has properly displayed her 'indian values'. Girl disappears. Hot chick dies, leaves behind a daughter who vows to find girl and make boy marry her finally. Which, ofcourse they do.

So lets start at the begining. Perfect stereotyping - boy and girl are best friends but he doesnt love her because she is a tomboy. The day he sees hot chick in tiny skirt, all friendship goes out of the window. But no, he is the quintessential male! So he waits for hot chick to sing 'om jai jagdish' and also don a suit, cover her head and go to a temple before he decides to shower his love on her!

It gets better. So some 10 years later, hot chick is not in the scene anymore and her daughter is trying her best to get boy to chance encounter with girl again. Which he does. And what does he find? That girl is not the tomboy he knew...she has transformed almost like a butterfly and evolved into long hair and chiffon saris which keep blowing in the wind to show her midriff. Ofcourse, boy finally decides that he loves her. Now that she is feminine enough for his taste!

But here is the clincher. The girl has only ever loved him. Even after 10 years of unrequited love and after being rejected for hot chick she doesnt so much as bat an eyelid before running back to him.

And the boy, remains happy ever after!

PS- all those wondering why in the world I have been calling Rani Mukherjee hot chick...come on guys, this is 15 years back when Kajol still had a unibrow and Karishma wore her brother's clothes!
at August 09, 2010

This is my favorite picture. Simply Beautiful picture, Gorgeous Kajol, and awesome acting and over all awesome picture.