There is no angst
There are no emotions
Just nothingness
It’s not dark, just monotonous
Like the clock that goes tick tock
And seems to be in a rush to get somewhere
But comes back where it started from

This is one Paathshala I suggest you bunk!

So let’s say that it’s a Saturday evening. You have the option of taking the dog for a walk, painting the garden fence, counting how many mosquitoes have found their way into your house or watching the film “Paathshala”. I would suggest you go in the same order of preference. Take the dog for a walk, atleast he will be grateful and you would get some exercise. Paint the fence – it will look pretty, get you complements and make the missus happy! And if all else is over, resort to counting the mosquitoes. It may seem like a futile exercise but it helps to know your enemies before annihilating them. And even after all this, if you still go on to see the film, well then my friend perhaps you deserve to go through it!

There are some movies where you walk out of the hall with a puzzled expression on your face. No, its not about deciphering some major twist in the film that you didn’t understand. Rather, you look at your companion and wonder aloud why someone would bother to pay actors, make them work for so many months and actually bother releasing a movie like this! 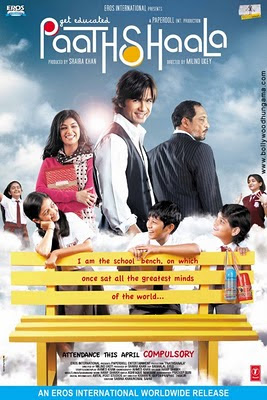 So you think I’m being judgemental? Let’s see. The story (??!) revolves around a school which has been highly reputed since years but has stuck to the principles of education and not given in to commercialisation. As a result, the facilities are dated and the trustees threaten the Principal (Nana Patekar) that they will close down the school and build an apartment complex unless he upgrades and starts making profits. So far so good. Nana Patekar has a bunch of people on his staff rolls whom someone has painstakingly tried to characterise but failed miserably. So there is a professor who is obsessed with NASA (except that he never mentions it once in the film), there is the Bengali geography teacher who is always worried and confused. There is the school peon who actually gives a great performance (the only one in my opinion). And as a last ditch attempt to bring in the viewers, there is Ayesha Takia (a nutritionist who supposedly cooks for the kids but is never seen doing so and whose only apparent job is to switch off the hostel lights at night). And ofcourse there is the drool worthy Shahid Kapur. For him, I forgive the director. Even if he has a Shahrukh hangover from Mohabbatien. 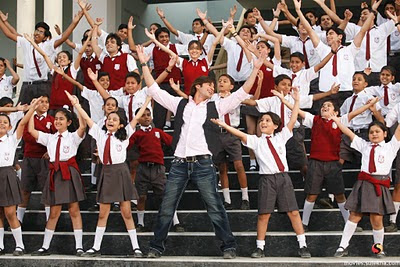 So the director brings together all these people and asks the script writer to somehow tie them in together. The script writer has an off day and weaves a story which has more loose ends than a bunch of tassels. There is so much that could have been done with the film. A spark of romance between Ayesha and Shahid, the childhood crush of a class 12th girl on Shahid and how he handles her, the pretty girl in school/ the guy who likes her/ and her jealous brother. The trustees and their anger at being scorned. Alas, so much potential, such a wasted script.

What further surprises me is that the director actually brings together some fantastic child actors whom the public adores. Remember Kajol’s cute son in Fanaa called Rehaan. He’s there as is the lil girl in Cheeni Kum who treats Big B like her boyfriend. Add to that, there is also Aanandi – the household name of the girl in Baalika Vadhu on Colors. Such fantastic performers. So pointless a journey!

I cant even suggest that you go watch the film and make up your own mind. That would just be plain sadistic on my part. If you’re done counting the mosquitoes, help your son with his maths problems. Trust me, it’ll be more fun!

Rating: 1/4th and only because Shahid Kapur is so incredibly hot.
Paisa Wasool Moment: Paisa Wasool?? Are you kidding me? I’m suing the director for punitive damages!
at April 28, 2010 No comments:

.
It is always a difficult thing, leaving an organization. Like everyone else, you may crib about your workplace often, but when it comes to finally walking away, I believe it takes a lot of courage. My father always taught me – don’t leave an organization when you are at a low. Quit when you are at your peak and quit for the right reasons.

So when I put in my papers a month back, I did not do so because there was something lacking in my current job. My work was being highly appreciated, I had a great team and the depth of my profile and role was the subject of envy. My leadership appreciated me and has been gracious enough to still keep doors open for me after I leave. I quit merely because my goal in life is a little different. My goal is peace of mind. I quit because I believe I have a lot to experiment before I finally find the thing I want to do for the rest of my life. I may be exceptionally good at my current job but my passions may lay somewhere else. It is in this search that I have set off again. Whether it is writing or entrepreneurship, I hope I find the courage to keep searching for my calling.

It was not an easy decision to make. When you’re good at something and the same is lucrative, you may fall into the inertia of its comfort. It took me a lot of thinking and years of building up my courage to take a step off the edge. But I could only do so because I knew that if I faltered and fell, I would have hands that would reach out to steady me and never let me go. I could do this because I had the support of my parents, sister and brother in law who may not agree with my decision but would always support it. I could do this with the blessings of my father in law, my mother in law, sister and brother in law who not only support my idiosyncrasies but egg me on. My best friends who are my emotional wall and would shield me from the world if required. Very importantly, the readers and followers of my blog who gave me confidence in my writing, many of whom silently read the posts but if I did not write for a while, would tell me that they missed it!

And most of all I did this with the solid reassurance of the Husband, whom this decision may most affect. If it wasn’t for his understanding, his love and his confidence in himself and in me, I perhaps would always be in double minds.

So, here I am on the threshold of a new chapter in my life, fresh with anticipation. It is not relief I feel, but the excitement of a child who cant wait to enter Disney land. It is a special day today. Today I feel blessed.
at April 20, 2010 10 comments: