.
It has become fashionable these days to criticize movies which are hyped before releasing. More importantly, it has also become fashionable to criticize movies made by Ram Gopal Varma. We love to bash him. It is one of our favorite pastimes. His films, his attitude, where he goes and with whom – its all under our scrutiny. Thus, even before the film Rann released, the common reaction amongst the multiplex viewers was how it was going to fall flat on its face. It was almost as if they were waiting with bated breath, to see RGV crumble yet again.

Well, he didn’t. He stood tall. I am almost having second thoughts about writing this review because I expect a lot of backlash. So let me do this – I will play devil’s advocate and see this movie from the eyes of the critic and from my own eyes. Whom you choose to believe is completely your decision. 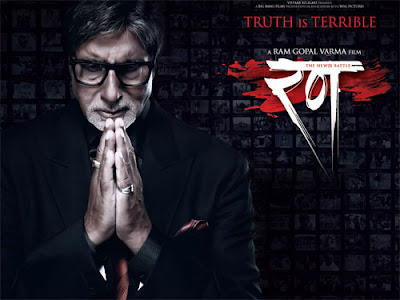 Critic – There was a time, when RGV was known to have a golden touch. Movies like Rangeela, Satya, Company, Kaun and even Sarkar showed shades of his talent. Unfortunately, like a lot of creative people do, he slipped. And he has been slipping ever since. RGV ki Aag was a disaster of monumental proportions and he couldn’t redeem himself even with a Rann.

Me – RGV is a man who borders on genius. And like most geniuses are, the lines of his creativity blur sometimes. He has made complete disasters and he has given iconic films. So let’s leave the baggage behind and see this film for what it is. Rann is a take on the media industry and how it is intertwined with politics. The muck of conspiracies and corruption are portrayed as this movie pans out.

The ensemble star cast has some very powerful actors. Paresh Rawal is brilliant as the cunning politician who will go down but take the country with him. He is supported by Rajat Sharma who is a veteran actor and portrays his character of a businessman advisor to Paresh with élan. Monish Bahl plays an ambitious owner of a news channel and is believable in his treachery. Sudeep who plays AB’s son in the film is ambitious yet doesn’t realize where his conscience draws lines. The 2 people who are unnecessary in the film bordering on being irritating are the 2 women – Gul Panag and more so, Neetu Chandra. I did not expect much from Neetu Chandra except for her to be attired frugally and stand around but her constant whining with the only dialogue she’s given (“What happened Jai”) made me want to reach out and give her a good shake!! Gul disappointed after showing her acting poweress in films like Dor. Amitabh Bachchan doesn’t need a review. He plays his part well. And no, don’t listen to the critics about Rajpal Yadav overacting. He had the audience in splits and did his part in lifting the spirits of the film.

Critic – It may do well to shoot a teenage horror film with a handheld camera but a venture like Rann could do without the trembling hands. Also, what’s with the close up shots of characters. It’s unnerving seeing them so close all the time! RGV, get a new style!

Me – Every director has a style. Tarantino is different from Guy Ritchie who is different from Spielberg. RGV likes to get into the character with close pans, very unnerving shots. And with the kind of films he chooses to make, it’s an effective tool. But yes, I must confess, I could do without the camera shaking sometimes.

The background score of the film was very apt. Brilliantly penned lyrics that talk about how the country is being eaten internally, the score doesn’t distract you for a moment and yet manages to weave into the story. I wish they did not have to drop their version of “Jana gana mana” that they created initially. It was so effective, I had goose bumps when I heard it first.

The film is not a path breaking documentary on the Indian media industry. Neither is it a masala film on family dramas. The story is predictable, with no apparent twists. Yet, it is told in a manner that is hard, effective and honest.

Don’t listen to the critics. Watch it. And form your own opinion. I stand by mine. I liked it.

Well written. I will definitely be watching it with an open mind. was I was never one for am junta/critics anyway. no bherh chaal here!

Reading these kind of posts reminds me of just how technology truly is ubiquitous in this day and age, and I can say with 99% certainty that we have passed the point of no return in our relationship with technology.


I don't mean this in a bad way, of course! Ethical concerns aside... I just hope that as technology further develops, the possibility of copying our brains onto a digital medium becomes a true reality. It's a fantasy that I dream about every once in a while.