Was Edmund Hillary really the first person to climb Mt.Everest?

.
Many believe that it was not Edmund Hillary from New Zealand who was the first to scale the mighty Everest. They believe it may have been his skilled Sherpa - Tenzing who actually was the first to climb on. But not many people know that long before 1953 when 'Sir' Hillary climbed to the top of the world, another man had in all probability already conquered the Everest.

George Mallory started climbing rocks even before he could walk. His one dream in life was to climb Mount Everest and be the first person ever to do so. He made 3 attempts over the years in this regard, each without maps, venturing into land that no human had ever seen, temperatures that no one had ever experienced and no knowledge of how the body would react at that height. In 1924, when he left the last camp with his climbing partner Irving, many believe he managed to reach the summit. 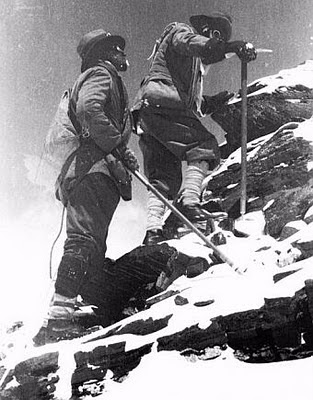 The truth about Mallory's success remains a mystery. Both climbers failed to return back to safe grounds and it was only 75 years later that his body was finally discovered. Besides his skill and determination, one of the reasons that the myth of his success remains alive is that he always carried a photograph of his wife Ruth in his pocket when he climbed with his ambition to leave it on the top of the highest peak in the world. When his body was found 75 years later, perfectly preserved in the ice with his garments in good condition, the photograph was not on his person. It is believed that he left it on the peak when he and Irvin climbed atop and became the first ever humans to see the world from that height. 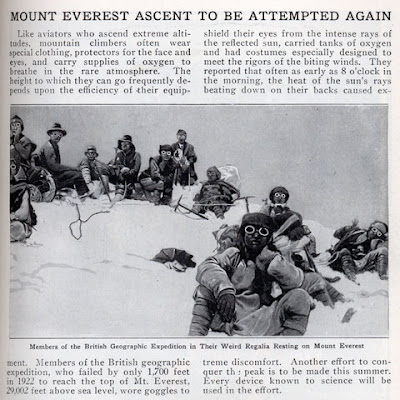 29 years later, with better technology and knowhow at hand, Edmund Hillary made history by being the first person to reach the pinnacle of Everest with Tenzing. They spent only about 15 minutes at the summit. Hillary has been quoted as saying that 'They looked for evidence of the 1924 Mallory expedition, but found none'. They said that they searched for Ruth's photograph on the peak but there was none. Hillary also later claimed that even if subsequent explorations discovered that Mallory and Irvin has indeed been the first people to reach the peak, historians should not allow his name to be changed or removed as a successful climb also means getting back alive.

Believe what you will.

Years later, Mallory's grandson, also called George Mallory, reached the summit of Everest in 1995 via the North Ridge with six other climbers as part of the American Everest Expedition. He left a picture of his grandparents, Ruth and George, at the summit citing 'Unfinished business'.

If this post piqued your curiosity, read the account as told by Jeffrey Archer in "Paths of Glory"

Or else, just read the bible called Wikipedia here
at February 09, 2010

Giants get to the top by climbing on the back of little people .. Of-course Hillary got a piggy back ride from Tensing (correctly spelled Ten-singh ;-) to make it to the top.

Now, I agree with Hillary, that he was the first person to "successfully climb" Everest. Successful climb involves getting down in one piece as well.

I would agree BB. Each expedition also involved 400 mules and 90 sherpas to reach the summit. The wise decision Hillary made in my opinion was to take a sherpa with him on the final climb. As he later confessed, it is only the insiders, the locals who best know this terrain and how to deal with it.

But having said that, I wouldnt take away their credit. It just fascinates me though that if George Mallory had also chosen a sherpa to climb with him to the summit like Hillary, he may have been alive to tell the tale. They climbed to 28,000ft without oxygen with prehistoric woolens and tools.

The only question remains - did he make it to the top? Will history be rewritten if one day we discover the kodak camera that he and Irvin took to take each other's photo at the peak....

To learn more about the Sherpas of the Mt. Everest region, read Beyond the Summit by Linda LeBlanc. Sherpas are the true heroes of Everest. Without their assistance, very few would reach the summit. Details of Sherpa culture and religion are interwoven in a tale of romance and high adventure. The story has something for everyone: a love affair between an American journalist and Sherpa guide, conflict between generations as the modern world challenges centuries of tradition, an expedition from the porter’s point of view.

Below are selections from reviews. To read the complete ones and excerpts go to www.beyondthesummit-novel.com

Beyond the Summit, is the rare gem that shows us the triumphs and challenges of a major climb from the porter’s point of view. The love of two people from diverse cultures is the fiery centerpiece of a novel that leads its readers through harshly beautiful and highly dangerous territory to the roof of the world. Malcolm Campbell, book reviewer

Conflict and dialog keep this gripping story of destiny, romance and adventure moving from the first page to the last paragraph. LeBlanc has a genius for bonding her readers and her characters. I found I was empathizing in turn with each character as they faced their own personal crisis or trauma.
Richard Blake for Readers Views.

A gripping, gut-twisting expedition through the eyes of a porter reveals the heart and soul of Sherpas living in the shadows of Everest. EverestNews.com

A hard-hitting blend of adventure and romance which deserves a spot in any serious fiction collection. Midwest Book Review

LeBlanc’s vivid description of the Himalayas and the climbing culture makes this a powerful read. Rocky Mt News Pick of the Week

A rich adventure into the heart of the Himalayan Kingdom. Fantastic story-telling from one who has been there. USABookNews.com

This is the book to read before you embark on your pilgrimage to Nepal. The author knows and loves the people and the country, and makes you feel the cold thin air, the hard rocks of the mountains, the tough life of the Sherpa guides, and you learn to love them too. This is a higly literate, but also very readable book. Highly recommended.”
– John (college professor)

Memorable characters and harrowing encounters with the mountains keep the action moving with a vibrant balance of vivid description and dialog. Literary Cafe Host, Healdsburg, CA

This superbly-crafted novel will land you in a world of unimaginable beauty, adventure, and romance. The love story will keep you awake at night with its vibrant tension and deep rich longing. Wick Downing, author of nine novels

Such vividly depicted images of the Everest region and the Sherpa people are the perfect scenario for the romance and adventure feats narrated. It’s a page-turner, so engrossing you end up wanting to visit Nepal! Not just novel, but perfect for those seeking to get acquainted with the culture of this country.
By Claudia Fournier (América, Bs. As., Argentina)

Thanks. Unfortunately I havent found that I usually have too much to say that a tweet cant contain in its limited words!! So, the blog is where I pour my opinions. Do keep tuned in...

I really like when people are expressing their opinion and thought. So I like the way you are writing

Useful blog website, keep me personally through searching it, I am seriously interested to find out another recommendation of it.