A weekend in Kerala

.
My latest travelogue - "A weekend in Kochi"...experience the wonders of the Kerala backwaters by reading this feature on Rediff here 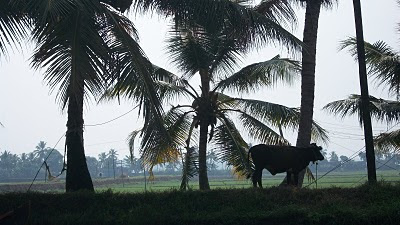 The film that just happens to be named "Sherlock Holmes" reviewed 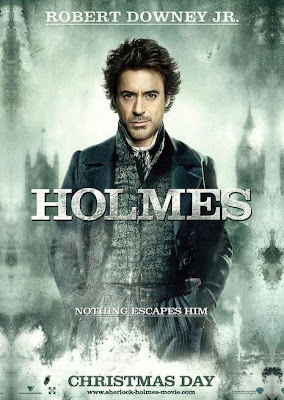 The problem with this film, and yes there is just one little problem, is that it happens to be based on a literary character who is so deeply embedded in our imaginations that it is difficult to dislodge him. That is the issue with characters like Holmes, or Nancy Drew...or even dear old Potter.

But for a second, forget that this is the Holmes we all know. Forget that he is always supposed to be perfectly attired, politeness personified, the one who depends on his brain vis a vie his brawn. Forget for a moment that he is the proper English gentleman and my friend, you will be in for a treat.

Because Guy Ritchie's Holmes is nothing like the one we know. Not even a shadow of him. He borders on lunacy, thrashes around in the mud, is rarely ever in a clean suit and would rather fight his way through rather than discuss it out. But having said that, this character is vivid. He is witty, he is clever and he is unpredictale. Robert Downey Jr. has you hooked from the word go and from the very first scene to the last, he keeps you on your seat's edge. 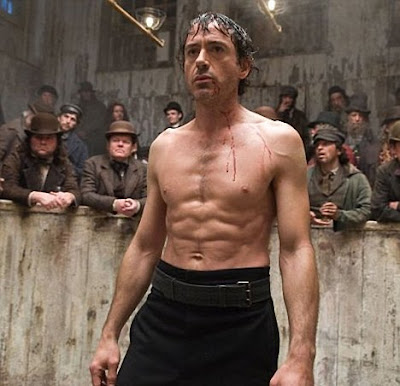 The film is shot is fast short shots, almost Tarantino-like, the kinds where if you blink too much, you may lose the the plot. A visual delight is the treatment given to some fight scenes where he enacts the sequence bit by bit in his head and then goes ahead and executes it. Absolutely fantastic cinematography and after this portrayal of London's dark alleys and grey characters, the city will never be the same again. The other characters play suitably well, the 2 women, Dr.Watson and Lord Blackwood deserving a mention. But the star of the show, unarguably is Robert...and the guy at the editing table.

Forget the namesake of the film. Just call it "Madness and More - by Ritchie" for all I care. But do watch the film. You wont regret it.

Paisa Wasool Moment: The fight sequences with the double takes.
at January 27, 2010 5 comments:

A night that bridged borders...

Aman Ki Aasha. Three simple words that signify so much. The new campaign launched by TOI may just be that - a good brand campaign without affecting much change, but the platform taken is undeniably ambitious. Love Pakistan. Again, 2 simple words but when put together, seem so incredulous. But the question that the campaign tries to raise, is that do you and I, the common people still harbor hatred for people across the border. Or are we all just so bored with the monotony of having to hate each other and would welcome a scenario where we can hope for peace....aman ki asha...

To this extent, Times Of India held a concert in Delhi yesterday where Kailash Kher and Rahat Fateh Ali Khan shared the stage. The concert was held inside the historical 'Purana Quila' which amplified the significance of what was being tried to achieve.

But the concert was not about political standpoints or about the past. The concert was just an expression of how the art of music can bridge borders, how sur and taal appeal equally to us....regardless of which direction of the border they cascade from. The music that the two performers engulfed us in, was not just captivating, but almost held the 7000 people strong audience spellbound.

Kailash Kher remains one of my favourite singers and the honesty in his voice when he sang the likes of "Teri Deewani"...or "Tu Jaane Na", cut through the heart like a sharp edged sword...and left one wanting more...

The palm trees on the sides, the lit up fort in the background, the enigma of 2 wonderous voices singing together, the stars above, the steaming hot kullarhs of chai and the nip in the air....a magical evening like none else.

Row row row your boat gently down the stream... 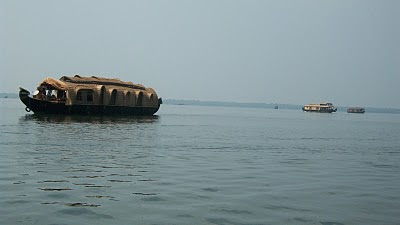 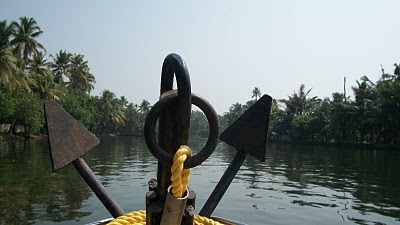 The only other sound's the sweep...of gentle wind and downy flake..

The boat hums as it gently makes its way down the creek. There is silence all around. Save for the sound of water lapping on the sides of the boat. The pace is laidback. Almost as if cautious not to cause a ripple in the stillness.

The palm trees sway to the gentle breeze. The paddy fields stretch as far as the eye can see. Locals working in them dot the fields from far seeming like a few drops of color in the stretches of green.

A coconut in one hand, the pen in another. Never have I felt so inspired to write. The water continues gently splashing on the sides of the boat.

City life seems to lose its significance here. It's as if my watch has stopped. It is a moment. And me in it. And suddenly, there is clarity. This is what I was born to do. Write. And it took a trip across the length of the country for me to realise it.

The boat hums along, snaking its way through the backwaters of Kerala like a lazy reptile. The gentle breeze blows through my hair. This is life. If there is a heaven, it is here. This truly is...god's own country... 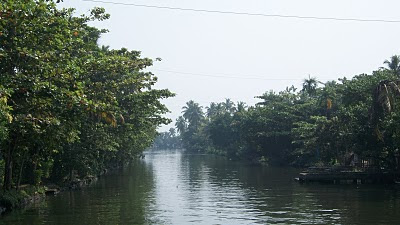