.
Let me disclaim at the onset that this review shall not include my opinion of the actress in the film. It is a matter of principle. Nevertheless, a film is the combination of efforts of various people and this one is an effort that demands appreciation, thus I shall review it.

Tum Mile is a tale of the day that Mumbai was flooded. Not the annual rain floods that Mumbai-ites are so used to, but a day that the rain gods tested the city. Actually, let me retract that, it is not a tale of the floods. It is a tale of 2 people. 2 people who fell in love 9 years before this fateful day far away in Cape Town. Who discovered each other and the joys of togetherness. Who found a sense of being complete together. And whose paths went different ways 3 years later. 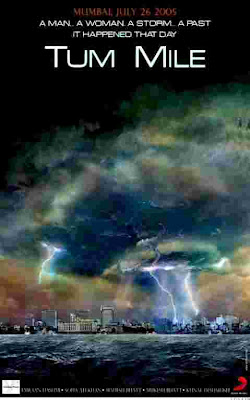 That fateful day, Mumbai brought those two together. In a moment where one doesn’t know whether we will see the rising sun the next day or not, clarity is a thing that comes suddenly. One suddenly realizes what one wants, what one yearns for. The one person whose wellbeing is of upmost importance. The one face one needs to see lest the dawn never arrives.

The film works because of its reality quotient. The relationship the 2 shared in the past is easy to relate to. Their fights are real, their frustrations are as are the way they deal with them. The film doesn’t over dramatize unnecessarily. It is easy to dwell on things like the father who never has time for his family but the director steers clear of such trivialities and keeps the story on course. And keeps it real.

The sound track of the film like all Emraan Hashmi films is exceptional. Each song touches the heart.

The movie also works largely because of the actors. The 2 protagonists carry the film almost single-handedly (or double handedly if there’s such a word) on their shoulders with the other actors not having too much screen time. The only other person who has a meaty role is the friend who seems like a first time actor and yet does a good job.

Don’t nitpick in the film. I don’t know how a painter/ waiter can afford a pad like the one they stay in. I also don’t understand why the friend would agree to walk around the flooded city to help his friend’s girl and not head home to his own wife who must be worried sick. But as I said, don’t bother with these.

All in all, worth a watch. Good ol’ love story. Feel good.

nicely reviewed. will give it a watch because of it.

do see it....best viewed on a winter evening tucked in a blanket with a bag of popcorn!