.
It would be unfair to review this as a movie. One doesnt go to see Avatar as a film. If you did, thats where you went wrong. Avatar is a 3D experience. Nothing short of that. And if you havent seen it in 3D, go see it again. This time, see the real thing. 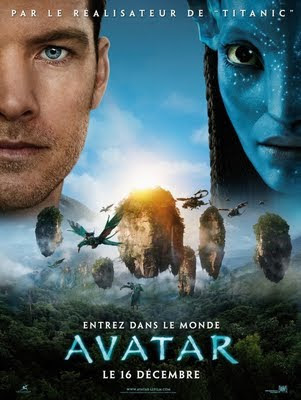 A storyline based on the done-to-death - there is another world called Pandora which is rich with a certain mineral that has a very high price on earth. Thus, humans find an indigenous way of turning their bodies to resemble those of the inhabitants of Pandora to convince them to move away so that we can loot their wealth.

So, whats new, you ask. Now with the storyline out of the picture is when you will be able to appreciate the world that this movie opens up for you. James Cameron conceptualised a world that is no less wonderous than "The Lord of the Rings" or "Potter". And that is saying a lot. Pandora is what dreams are made of. The trees rise to talk to the clouds like the 'Faraway Tree', flowers as large as humans glow in the dark and cotton seeds fly around like little angels. Every aspect of Pandora is phenomenal, be it the hammocks in which the natives sleep, the way the ground lights up when you take a step or even the floating mountains.

Seeing this film in 3D is like taking a walk through disneyland. The screen is so vivid that you sometimes feel that the arrow may come and hit you. The subtitles seem to float in the air and the computer screens in the film are designed in this fantastic semi circular way that seems surreal in 3D.

The experience only gets better as you get more involved in the film. The protagonist volunteers to go mix with the natives (Na'vis) to act as an insider for the US marines and eventually help drive them out. Predictably, he falls in love with the daughter of the clan leader, Neytiri. The film touches the core of your being in its sensitive portrayal of the Na'vis and you find yourself aligning with them and cursing the evil humans. They are pure...and brave...and wonderous.

huh .. "is like taking a walk through disneyland" from someone who refused to come visit disney with us ;-)