.
Maslow is not always correct. Sometimes self actualisation cuts the queue and manages to weed its way through even before all other needs have been fulfilled. And that is what this movie is about. About not living a life for the sake of living it,but rather doing it on your own terms. 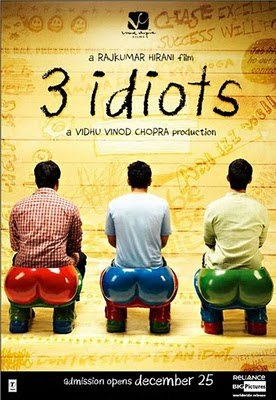 3 Idiots like many Aamir Khan films is not a movie, its a riot! The story line is based on Chetan Bhagat's "5 Point Someone", his first book and his best work till date. Its the story of 3 friends who meet at an engineering college in Delhi and how they change each other's lives. The films runs in flashbacks between their days at the college and the present where 2 of those friends are trying to look for thier 3rd pal who disappeared after the convocation.

The movie is smart and the script witty. Each scene has the audience in splits. The director does oscilate a little too often (and too suddenly) between tear jerk moments and comedy but you find yourself forgiving him this folly as you're too busy laughing your head off.

The actors have done a phenomenal job. Let me confess, I was very skeptical when I entered the hall! 42 odd year old men posing to be college students seemed just too ambitious to me. But thats the beauty of the film. It just doesnt matter how old they are or look. One is so immersed in the film that you dont bother with technicals like this. Madhavan shows once again that he can handle diverse roles with aplomb. He is fun, geeky and very likeable as Farhaan, the wannabe wildlife photographer whose father decided he would be an engineer 30 seconds after he was born. Sharman Joshi has incredible comic timing and has the audience in splits. What is more important though is that he can as easily urge a tear out as he can make one laugh out loud. He may never be SRK, but we should look forward to some very good work by him.

Boman Irani plays the dean of the college. A role too exaggerated to allow him room for improvisation. Having said that, he acts out his character perfectly as the stuck up arrogant professor whose aim in life is to churn out factory manufactured engineers who all have top grades but rarely have a mind of their own. His daughters Mona and Kareena did a great job too. In the tiny roles given to them, they amuse the audience.

As expected, this film is made for Aamir Khan and he is the focal point of the screenplay. But not in a hogging sort of way. He plays the guy who doesnt believe in conventions and challenges the system but not in a rebellious way. Rather through the belief that one should study for education, not degrees. Success will follow you, it shoulnt be the other way around. Sounds a little preachy? Well, Baba Rancho as they rightly call him in the film, is always ready to distribute free gyaan. But you forgive him as well. Because he gives to us the most hillarious scene in recent times involving a speech on Teachers Day which is probably a well known hostel joke but nevertheless had the entire hall rolling on the floor.

Last but not the least, 2 more actors deserve credit. A new actor called "Omi" who plays the geeky "Chatur", the quintessential engineer who mugs up from the book and goes to US to buy his $3 million mansion with indoor swimming pool. The guy is so brilliantly funny that I find myself giggling as I type this. Also commendable are the efforts in a tiny role given to an actor who plays "millimetre", a boy who does odd jobs in the hostel.

The music in the film is already a hit nationally. Everyone can be seen humming to the tunes of "Aal is welll"....The other track "Saari Umr Hum" took me back to my MBA days. The feel of the song is typical hostel...the strumming of the guitar, the friends...

All in all, full paisa wasool. As I always say, please dont nitpick with things like how a certain scene involving delivering a baby is stretched or how the baby kicks in the womb everytime he hears the words "aal is well"...Dont bother with questions like this.

Buckle up. Get your popcorn ready coz you wouldnt want to miss a minute of this film. Go see it. For some great laughs. I loved it, you will too.

Paisa Wasool Moment: When Aamir rushes Sharman's ailing father (who used to work in the postal department) to the hospital on a scooter - Sharman exclaims to Aamir how he could possibly get him on a scooter. To which Aamir retorts "to aur kya karta? speed post se bhejta??"
at December 25, 2009

really lok fwd to seeing it now! am currently reading 2 states and thoroughly enjoying it as Im sure u can imagine!

It sounds like you're creating problems yourself by trying to solve this issue instead of looking at why their is a problem in the first place.

The matchless message, is interesting to me :)