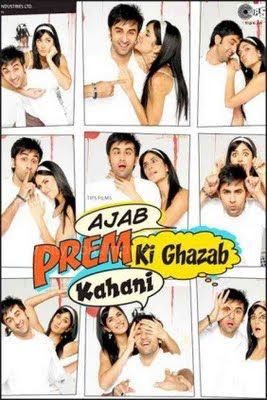 .
Expectations are a darn thing. They can ruin something for you even before it happens. Take for example the case of Ranbir Kapoor’s latest “Ajab prem ki gazab kahani”. The guy has been on a roll and one automatically hoped for this one to crack it as well. Hmm…well, lets just say, he didn’t quite manage to.

Actually the post has started on the premise that the film’s success was his burden. Let us distribute the burden on everyone. The director, the producer, all the actors included.

Don’t get me wrong. Ajab Prem ki Gazab Kahani has its moments. Made in a manner which is not so much Govinda but more non stop nonsense like a Charlie Chaplin film (though not in the same league), the film is cute and fresh. The director has attempted to make it look like a parody, making everything seem real is not his intent. Else how could he have explained things like a train stopping in the middle of the bridge just to pick up the protagonists who are in the middle of a chase.

The best way to enjoy this film, and yes it is possible to enjoy it, is to leave your logic outside the door. To give it company, also leave behind your expectations….and your watch. The first 45 minutes drag by with you literally hanging on to every joke trying to find it funny. But hang on, it only gets better from here. The latter half of the film gets some quick quips in and unknowingly, you will find yourself laughing out loud. Ofcourse you sometimes wonder what’s with the deal about the stammering, but hey, dint I tell you to leave your logic outside??

The actors have actually done a good job. Ranbir is in my opinion the next big thing. He just seems to get better with each film. Katrina is absolutely stunning!! And her acting is cute and sweet. The music of the film gets a thumbs up. The songs are addictive and the picturization well done.

Some reviews have gone overboard and compared the film with Andaaz Apna Apna. In my humble opinion, that’s pure blasphemy. Don’t weigh down the film with your expectations and walk in for some entertainment, you may end up with a few clean laughs.

PS: I am in complete confusion about why all guys want to look beefy. Salman and Upen Patel, both who obviously gym and are portrayed as having awesome bodies in the film are in my opinion just plain blah. Bulk is not hot guys, lean is. Check out Ranbir….
at November 11, 2009

great review as always!! have been waiting to watch it! will now go with my expectations set right! :)

now that Iv seen APKGK last night i agree with the review. we try to watch without expectations n for this one it was especially true-for the most part we found it cute n funny enough-got some laughs in, some beautiful songs n the evening was enough of a success at home (dvd watch)