.
What an absolutely lovely evening yesterday. It’s refreshing to know that there is still some childish enthusiasm left in this world. I constantly squash my own wondering when “childish” became a thing not to be.

So it was a friend’s birthday yesterday. We suggested that he and his fiancé - lets call them R & P, drop over in the night and we could have a nice dinner together. So I raced home after work, got my groceries and set about cooking. The menu - Cheesy macaroni with arrabiata sauce, Veg Au Gratin with pepper salami and garlic bread. In all my enthusiasm, I also baked a chocolate cake to be cut at midnight. But let’s not digress here. I am not the hero of this story.

The hero of this story is P – who went about all day talking to just about 100 vendors trying to figure out a crazy surprise for R. So finally when the clock struck 12, we blindfolded R and led him outside the house. When he opened his eyes, he saw the cake with candles on it and something that completely blew his mind! In front of him stood a buggy (carriage) pulled by 2 lovely white horses and decorated with 200 balloons. Amongst all the surprises he would have expected, this is one he would never have thought up of!! P had managed to find the buggy guy, get him to come on time, found a balloon guy who came and put all the balloons on the buggy…all by herself! 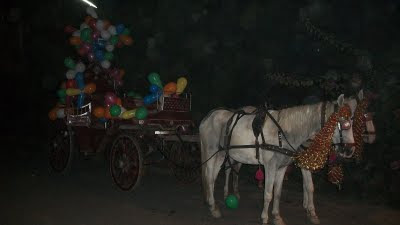 So there we went, the 4 of us on this crazy buggy, singing “Aelo aelo…aelo ji sanam hum aa gaye….” in the middle of the night on the roads of Noida for a ride. If we would have charged all those people who drove past us and tried to steal our balloons, we may even have made a profit. Or even put a fee on those who did a double take, rubbed their eyes and looked again to confirm that this was for real!

P – cheers to you. Its not often one meets someone who still believes in magic…and in creating it! You were awesome!!

Telecom cost for trying to find vendors: Rs.500
Cost of buggy: Rs.x
Cost of balloons: Rs.y
The look on R’s face when he saw this and the look he then gave P which said I-cant-believe-you-did-all-this-for-me : Priceless!!

am sooo happy for R and P and u both!! never ever let the child in u go away!!

wow!!! n all this in Noida! amazing!!!! I can imagine how much fun it would have been!

There are some things money cant buy!
Thats the gist of it.