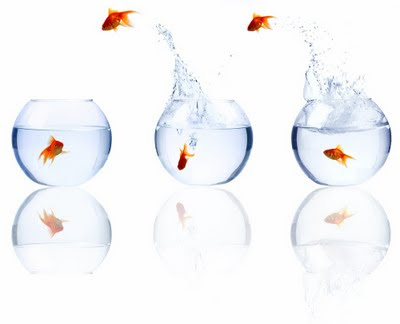 Let me tell you a very interesting story. When I was in Ahmedabad, my parents went and got a glass bowl with 3 gold fish in them. We decided to name them Eer, Biir and Phatte…after the song sang by Amitabh Bachchan. Eer, Biir, Phatte lived a great life – they would swim around all day and be fed yummy food (well ok, fish food)!

Then one fateful day, my mom came down from her room in the morning and found Biir floating on the water. We said a prayer and laid our lil pet to rest. Eer and Phatte continued to play with each other and live happily.

Then came the summer vacations when we had to make our annual pilgrimage to Delhi. Eer and Phatte were reluctantly handed over to our neighbors who promised to take care of them…alas, when we came back, only Phatte was to be found. Eer had left us too.

Phatte would swim around dejectedly and we just couldn’t take it anymore. So we went and got 2 more fish for its company and named them Heer and Ranjha. Heer – Ranjha made friends with Phatte quite fast and spent many a days frolicking around.

One fine day, my dad decided to give the glass bowl a wash. He gently put Phatte in the water jug followed by Ranjha. Unfortunately, my dear dad forgot (how though I don’t understand with it swimming under his nose) that Heer was left and there Heer went, down the drain (literally). I console myself with the thought that Heer must have gone on to live the life of the queen of the underground – with her looks, it wasn’t far fetched.

Nevertheless, there we were, left with our final 2 fish.

Imagine trying to explain to people why we had 2 goldfish called Phatte and Ranjha!!!
at October 06, 2009

LOL!!!!
I remember that :)
but the last line of your post is hilarious! quite the predicament! but imagine but then its such a good conversation starter! ;)

I would like to invite all of you to join blogging Social Netwrking
IEDig.com
which helps you to get more visitors to your blogs and you get the chance
to meet other celebrity bloggers.

There is an echo to that story in this house. The fish can be replaced by turtles and the residual name of the ones left behind are Alice and Sutra. The original couples were Kama-Sutra and Dubey-Alice (from the movie Monsoon weddings)

now you can just point em to your blog,eh?

this made a fun read. our goldfish (gidted to us) didnt survive long. M went l'il ahead of time and said how can we take care of kids if we cant manage goldfish. kids are much easier i tell ya! ;)

This post was interesting, how long did it take you to write?

Good point, though sometimes it's hard to arrive to definite conclusions

This post was interesting, how long did it take you to write?