Of Wineries and Beaches

I better keep writing or the backlog will be too tough to clear. Take for example the fact that I wrote just 3 days back...and there's already so much we've done in the mean time!!

So day 3 started with us heading out to Niagara on the Lake, a small quaint town just 15 minutes from the falls. In an effort not to waste any time, we headed straight to the vinyards to start off on our wine tasting tours! We went to Hillibrand, Jackson Triggs (where we also did the tour) and Joseph's Winery on that day. The vinyards themselves are just breathtaking....acres and acres of wines growing in geometrically perfect straight lines....and the French Chateaux style wineries in the middle of them! Of course after the 2nd winery, everything else started blurring :P!! Each winery let us choose one red, one white and one ice wine to taste. The Ice Wines are my favourite...the story goes thus - when the winter came, and the grapes froze, they would collect all of them and throw them away. Until one day a guy said, let me try making wine with the frozen grape too...and lo behold you got the sweet dessert wine called Ice Wine! 1 bottle of Ice Wine is made from the same amount of grapes as 10 bottles of Table Wine...and they are priced like that too!! 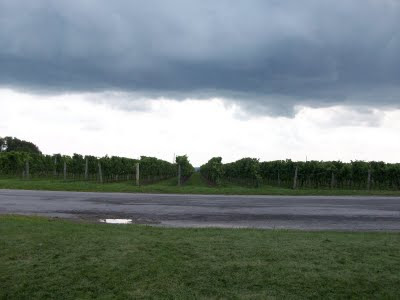 Some more interesting tit bits - wineries plant a rose bush in front of the vines...and that is because the bugs that attack the vines, attack roses first and they would get to know of it. We also learnt the correct way of drinking the wine...the swirling, checking for sediments and swishing in your mouth! I can safely say, this is one day that the Husband is not going to forget soon!

Day 4 had 2 more wineries and our favourite - Peller! And we took off for our ride back to Ottawa enroute Toronto. Which ofcourse meant that we make a pit stop at R & D's fav joint - the Lahore Tikka House....the taste of hot naan after days of deprivation even found a convert in me!

Day 5 in Ottawa. We finally got to see R&D's gorgeous town house. The streets are so beautiful here, like a doll town. We walked down to the park and went over to the supermarket for grocery shopping...where I believe I had to be revived!! I mean - they had 4 sections only for cheese for heaven's sake....and 1 entire row of dressings and sauces!!!!! Wonderland! A quick lunch of Fajitas followed.

But the icing on the cake was our evening walk at the Petrie Island. A beach just 15 minutes from their place!! We watched the sun go down over the water as boats raced past and impromptu beach volleyball games broke...it was the perfect end to a perfect day!

It’s 6:04am. I don’t have a clue what the date or the day is. I’m sitting in our suite of Crown Plaza by the French windows that directly overlook the Niagara Falls. The view is spectacular – for want of a better word. If there is one word that describes the falls, it is ‘Mighty’. It is a sight so awe inspiring that you can do nothing but stare! It has finally sunk in. I am in Canada.

7 years its taken for me to get here. In 2002 when my sis got married and moved here, I decided the trip was too expensive to ask my parents to fund. In 2005, I started working and got married in 2006. To cut a long story short, here I am now, 4 days from their 7th anniversary come to see whether the 7 yr itch is myth or not!!

Let’s come back to where we started. Please gear up coz this is going to be one heck of a journey. We flew out of Delhi at midnight on 7th Aug on Air France towards Paris. Watched Ghosts of GirlFriends Past and ate a very non appetizing VEGETARIAN meal(!!) of a tomato sandwich and cole slaw. Apparently we were flying over some airspace where non-veg is not allowed to be serve, but I personally just think they were just out of non-veg!!! The 4 hours stopover at CDG airport in Paris flew by and we continued our journey on Air Canada, which served much tastier food!! At noon on 8th August, we finally landed in Toronto, Canada.

Not willing to waste even a single day, we rested for a bit and were off to take the city on. First stop, CN Towers. THE place to get a view of the city – 147 stories up. A section of the landing has glass floor where if you stand and look down, you can actually see the bottom of the tower – trust me, it’s a sight not for the faint hearted! The hotdogs here are miles different from the ones back home. For one, the sausage is the size of 5!! We also topped that with a crepe with nutella, strawberries and bananas! Heavenly. The night was completed by a trip to the Greek Fest in town (Pilaros, Danforth). If you haven’t already, try their Gyros. The ones on offer were these wraps of chicken/ beef in pita with Tzatziki (a dressing of sorts). They are just purely scrumptious.

The next morning, we started early and with a breakfast of waffles and strawberries, we drove off towards Niagara. R & D had bought the all-inclusive passes for us and the entire day was spent visiting everything on offer. First up was journey behind the falls. They have built tunnels behind the falls and you can watch tonnes and tonnes of water cascading down in front of you as you stand right behind the falls! The board walk along the class 6 rapids had us convinced that they weren’t kidding when they said that these can’t possibly be tamed by rafters. The butterfly conservatory followed where thousands of butterflies flew around inside a tropical jungle setting. But it was the grand finale which was the cherry on the icing on the cake. The Maid of the Mist is a boat that goes to the mouth of the HorseShoe Falls at Niagra. And it is not an experience anyone can forget soon. With eyes that could barely open due to the mist, we squinted and held our breaths as we watched the fury of nature unleashed. There aren’t any words how I can explain the feeling of standing on that boat, staring at the falls crashing down just metres from where we were.

Absolutely exhausted by the end of it, we ended the day with a lovely dinner and beer sitting on the patio with live musicians playing on the side. 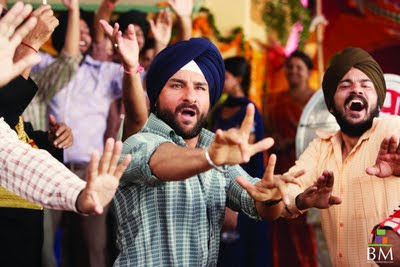 Thats the thing about reviews. You should never read one before going for a film and you should never write one after reading others. The best time to write a review is as soon as you come back from the movie, with your opinion fresh in your mind. Take for example what happened with Love Aaj Kal. I walked out of the hall with a smile on my face and a spring in my step. 2 days hence, I am confused about what I felt about it as everyone seems to have a conflicting view. So let me clarify at the onset. My review may be drastically different from a lot of others you read. For the sole reason that I liked the film. I did not compare it to Jab We Met or Dil Chahta Hai or anything else. I saw it as it was. And that is a sweet back to basics, girl-meets-boy-they-have-issues-but-love-triumphs kind of romance. The types that we dont see much of in today's age of complicated films.

The film, runs 2 parallel stories - one of Saif and Deepika, the modern day love, practical and rational. They take their decisions based on how they think the future will pan out instead of how they feel. Then there is a parallel story that is set in the 1970s about Rishi Kapoor's love tale. Imtiaz Ali has used an interesting creative device by making Saif play the young Rishi Kapoor, that too as a sardar. I daresay, Saif makes a dashing Sardar in the pursuit of a simple but gorgeous Punjabi kudi. Of the two tales, I personally loved that of Rishi Kapoor. The period setting, the 'adab' as they call it or 'nazaakat' of them falling in love without ever speaking a word stirred the romantic in me. 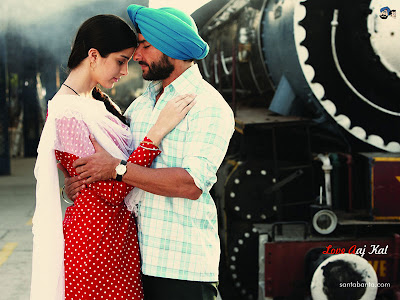 In terms of the acting, this is Saif's movie through and through. I try not to be a fan of Saif for personal reasons but he took the audience through the film single handedly. With some able guidance from Rishi Kapoor who seems to be getting better with each film. The sardar Saif was brilliant, the typical brave jat who weakens in the knees for a girl....the modern Saif was funny too, with great comic timing but it was obvious in his dialogue delivery that it was Imtiaz Ali's signature style. The simple girl in the flashback story was cute and played her role perfectly...I can see why they would not want to cast Deepika in the flashback. 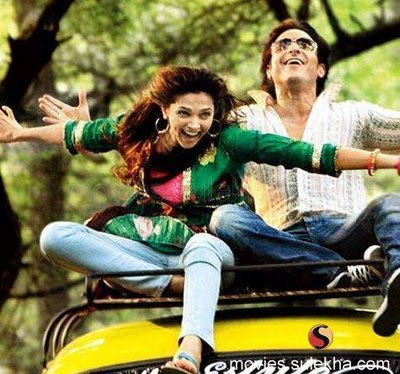 Which brings me to her. Because the moment you see this film, you will realise that besides her smile and her ravishing looks, she really is bad! When she speaks, you look around for the script from where she is reciting and when she tries to be funny, you cringe. She makes Katrina look like a National Award nominee!

The songs were fun and had me dancing in my seat (with everyone in the hall wondering what I was on).

I liked the film for its simplicity. For its belief in love. And in that nagging feeling that something is amiss. For its fiction of happily ever after. I dont believe in Soulmates and that there is one person for you in this world that you will keep searching for till you do find her/him. But its refreshing that someone does. The world needs some magic.

Go watch it without expectations. Its not the best film you would have ever watched. But its not one where you will be looking for the exit either. Sweet...simple...refreshing.

Rating: 3 on 5
Paisa Wasool Moment: Saif and Deepika in the Delhi Metro....he puts his arm around her as they always sat and suddenly realises that he can't do that anymore.
at August 04, 2009 7 comments: