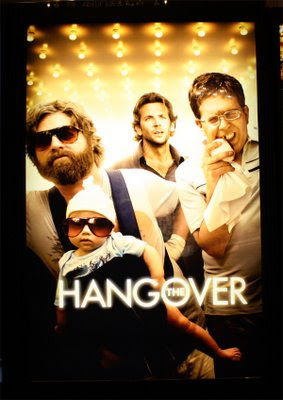 Comedy is probably the hardest genre to crack. Its not very difficult to make someone cry. Even easier to make a romantic film. But to make a film which has the audience in splits from the first frame right down to the last one is an achievement. And that is what Hangover is about. Pure unadultrated comedy.

The basic premise of the film is predictable. 4 friends take a roadtrip to Vegas for a bachelor's party. But thats where it ends. Needless to say, there is not one scene in the film that may be termed predictable. Even in your wildest dreams, you can not imagine what all these guys go through and how the movie progresses.

The characterisation is brilliant. Allan, the wierd dumb brother in law of the groom is the funniest. He doesnt even need to try hard, every shot he gives has the audience in splits. The groom himself (Doug) is probably the most boring character but to be fair, he doesnt have much of a role in the film. The hottie (Bradley cooper) who plays Phil is the most fun friend we all would love to have! But my favourite character in the film is Mr.Chow. He plays a don that the friends manage to be on the wrong side of. Him exclaiming in his squeeky voice - Fat man fell....or his not so political comments on - hahaha ....he is so fat it makes me laugh - were so unexpected that you couldnt help but burst out laughing.

Well all's well that ends well. Doug does end up getting married as planned (though that may be the only thing that went as planned). But not before 2 days of craziness that make sure you will recommend this film just as I am doing.

Go watch it. Not with kids or parents...but dont miss this one!

Paise Wasool Moment: Allan wakes up hungover and groggy and goes to the loo. Not knowing that there is someone sharing the loo with him....can't tell more, it'll spoil it for you!!
at July 06, 2009