Some movies are entertaining, interesting while they are running and yet completely forgettable. That doesn’t make them good or bad, it’s just the way they are. New York fits in this category. I didn’t find myself gushing about it the next day and yet when I suggested my friends go watch it, it wasn’t out of spite (I suffered, so shall everyone else!)! 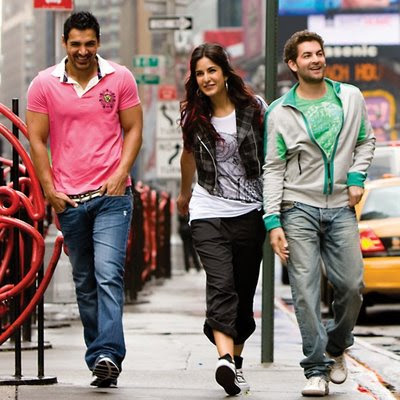 New York, as is obvious, is based on how the 9/11 affected the lives of the protagonists. Not in a documentary sort of way but rather in the form of a story. It revolves around the lives of 3 friends, played by Katrina, Neil Nitin Mukesh and John Abraham. The movie traces their relationship from college to 7 years later in completely different circumstances.

Being a Yash Raj Film, the eyes were treated to rich visuals, beautiful cinematography and imagery that would make even the drabbest of cities enthralling. The music was good (though not memorable) and did not seem to stretch forever. The screenplay would fluctuate between the present where Neil is being interrogated (rather politely) by Irfaan Khan (where have I seen that before?) to flashbacks on his life in college. Though not seat gripping, the narrative did not fall and kept us involved and interested.

Which brings me to the actors. Katrina Kaif is so incredibly gorgeous that it becomes irrelevant to expect her to act. She played her bubbly part well and did I mention how pretty she looked?? John Abraham seems to be getting more confident with each film. He definitely commanded screen presence in this one and is a feast for one’s eyes as well!! Which leaves us with Neil Nitin Mukesh. What a disaster! And this comes from a self confessed fan post his debut in Johhny Gaddar. The man seems to be at a loss of words, fumbling through the script and being dragged along by the others. I had moments where I wanted to reach into the screen and shake him awake but I managed to hold myself back! Irfaan Khan has done so many of these police/ FBI roles that even he seems to have lost interest in them. His constant repetition of dialogues (you have been ‘detained’) and references to Islam where completely irrelevant (on the jetty trying to tell Neil about the greatness of USA) were unnecessary. All in all, he’s done better.

My problem with the movie perhaps stems from the fact that I invariably ended up comparing it with the Pakistani ‘Khuda Ke Liye’ also based on how 9/11 affected innocent people. The latter was a piece of art, a piece of cinema that I will make my children watch decades later. The acting, the screenplay, the music, the emotions – there wasn’t a single flaw I could find in the film. If you haven’t seen it, then do not fret, you will enjoy New York.

Go watch it with some friends, take it as light entertainment and try not to notice the misspelt Barrack (!!) Obama at the end!