Whenever I travel on work, I make it a point to buy a book from the store at the airport for the flight. I could easily take something from home but this is the only time that I actually go out and purchase books, so I let myself indulge. The last trip, I picked up a book called Mayada, by Jean Sasson. She is the same author who has penned similar books like 'Daughters of Arabia', 'Princess' etc. Her themes are similar. They revolve around a central figure, usually a woman in the middle east and through her eyes, take the reader on a journey to understand her land and her people. 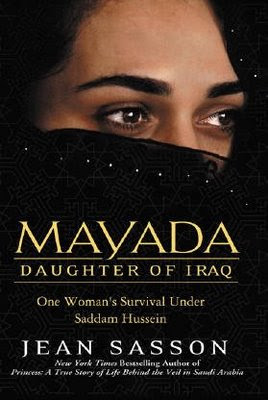 'Mayada, Daughter of Iraq' is based on the true story of a lady called Mayada Al-Askari in Iraq. Though Iraq was always slated to be more liberal than its neighbors, not too many of us know the truth behind Saddam Hussain's regime. For us, he is limited to a 30 second video on youtube where he is executed but we have no idea why. The book has been criticised by many as a pro-US invasion story as it shows US army as saviours of their land. I may not agree, but my opinion is not very significant in front of people like Mayada who have lived and witnessed the same.

With a blue blooded family tree, Mayada Al-Askari is of one of the most famous and highly respected families of the area, with her paternal grandfather Jafar Pasha Al-Askari, a World War II hero. Jafar Pasha served as the country's first Defense Minister and Minister to Great Britain. When Jafar was assassinated in Iraq, his obit was written by Sir Winston Churchill. Mayada's maternal grandfather was Sati Al-Husri, the first Arab nationalist, revered by many in the Arab world. This legacy helped Mayada open many doors, know the right people and live a enviable life as a successful journalist in Baghdad. She even met Saddam Hussain a couple of times and was felicitated by him by way of gifts (like a watch with his face on the dial and $3000 on one occasion) as appreciation of some of her articles.

One fine day, without any warning, she was picked up from her shop and locked up in a jail. With no means to communicate with anyone or even to let her children know where she was, Mayada literally disappeared off the face of this earth. The book narrates her time in prison and the other women that she is put up with in cell 52. The 17 'shadow women' as they are called were all imprisoned in such circumstances, without being given a reason why and tortured daily. The women discuss their stories and how they came to be there giving the reader a chilling view into the 2 faced regime. On the face of it, Iraq was liberal and prospering but within the dark lanes, everyone lived in fear and in constant threat of the dictator himself.

Mayada finally managed to get herself released by pulling the correct strings and escaped from Iran. She was instrumental in crafting this book and even now tours with Jean Sasson to tell people her story.

Critics have also disregarded the book as it tells the story of a privileged woman who led a life of luxury and who did not suffer much in comparison to the many other in that cell. I believe that the fact that this could happen to someone even as well regarded as her, is proof enough of the cruelty of the regime.

To check the accuracy of the accounts, I also had a discussion with my father in law who was posted in Iraq for a few years by the Indian Air Force during those days. Though they were treated with gloved hands, there are parallels that could easily be seen especially when he told me about Saddam's habit of giving away watches with his face on the dial and money rewards to show appreciation.

A rivetting read, Mayada is a book that you can not put down. It may not be a literary masterpiece but reaches out from the pages and touches your heart.

Nice to read your review. I'll alert Mayada, too. Thanks so much, Jean Sasson

Wow, this is surreal. Thanks Jean, it is a haunting tale told beautifully. Please do tell Mayada that I feel honored to have read about someone so brave and strong. I have a gorgeous little daughter and if she is even half as courageous, I would consider myself blessed!

Mayada will be very happy to hear this. I will ask her to log on if possible -- Give your gorgeous little girl a hug from me. Thank you... Jean

Thank you again -- fun to check in and see what's going on. I'm sure you are very proud of your precious daughter. How old is she? Please give her a hug and I will tell Mayada about your note. Bye for now! Jean

Lovely to hear from you again. Nyda, my daughter, is almost 2 now :-)