.
Sometimes someone comes along with an idea that seems so warped in the beginning but if you look inside, it answers questions that you have been struggling with for so long. For a long time, I wondered why our lives couldn’t be backwards. We would spend 20-30 years doing just about nothing and thoroughly enjoying ourselves. The next 20 odd years, we would spend in worldly pleasures and making a living while exploring the world. Then we would get an education to understand how people perceive things that we had experienced. The last few years, we would be blissfully unaware and yet healthy, enjoying things like running in the rain and eating popsicles. What a novel life it would be, where you would look forward to the next year.

Which is what this phenomenal movie is all about. Based on a book by the same name, the movie traces the life of Benjamin Button as he grows up in reverse. He’s born old and gets younger as people around him age. A concept that sounds bizarre at first but dealt with so delicately that you can not help but feel for this 7 year old boy who looks like a 70 year old man, can hardly walk but wants to play with the kids. He grows up (or grows younger in this case) in an old age home adopted by a kind hearted African-American lady. The story traces the life of Benjamin and how he accepts and deals with his particular situation. Brad Pitt and Cate both have acted exceptionally well and I’m dying to see Sean Penn to understand what he did better that Brad didn’t win the Oscar.

The movie won the Oscar for the best make-up and a critic on rediff wrote “It is difficult to imagine that a make up artist could surpass the brilliance of the Joker (Heath Ledger) but to make Brad Pitt look anything but the handsome devil he is must have been one task”!! And how true that is. When you see this wrinkled old lady on the hospital bed, you can not imagine that she truly is Cate Blanchett. The changes shown as she ages are done so beautifully that when in a scene she’s shown to be dressing, you don’t for a moment disbelief that she is 50 years old. Of course the beauty of the movie lies in Brad Pitt’s makeup. He is shown as everything from a teenager to a 70 year old and the transformation is brilliant. True genius. 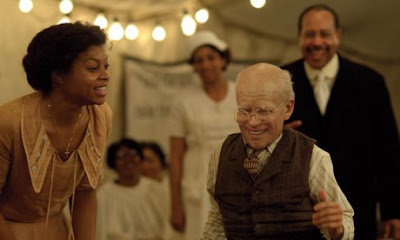 This is a film that stays with you. I will wait till I see the other nominations but I can not help but say that this one truly deserved the Academy for Best Picture.

Don’t miss it, buy the ticket in black if required. And carry some popcorn, the movie’s almost 3 hours long.

and i am now waiting eaferly to watch this one. wanted to watch Milk too. lets see when!