.
I refrain from reading reviews before watching a film. I like to go with a clean slate and develop my thoughts on it but before I sit down to review it, I like to read what Raja Sen, Rajeev Masand, Nikhat etc. wrote on it. So, even though Dev D released 2 weeks back, I hadn’t read a single word on it before we went to see it last night. 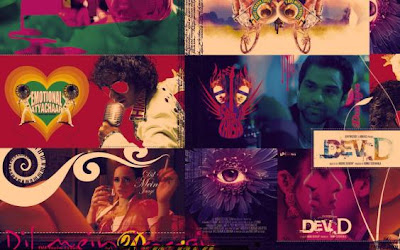 And let me say at the onset that I was disappointed. With the direction, the acting and the take on the story. Devdas may be a done to death tale but it’s an epic nonetheless. It’s an epic of powerful characterization, each actor has a persona be it Paro’s mother, Paro’s husband, Dev’s father and mother, Chunni Lal, Dev, Paro, Charamukhi. Dev D falls flat in this case. The actors merge into one another and no one holds their own. I can barely remember any other character besides the 3 protagonists. Chunni, who has always been a colorful picture is reduced to a slum dwelling pimp.

Secondly, the story stands for undying love and the kind of longing that every woman wishes a man feels for her. It also epitomizes what a loser Dev was with his incapability to take a stand when it mattered. This version unfortunately just manages to show the 2nd part – what a loser he is. Love is replaced with lust and some sort of a ridiculous hormonal imbalance. Apparently, neither of the 2 women want much more from Dev but to sleep with him. It’s interesting to see Indian movies getting bolder but here its just unnecessary. Paro doesn’t fret for a moment when she gets married and dances gaily at her wedding.

Lastly, it’s always interesting to see a new take to an old script but this one exaggerates away to glory. The doped out, drunk beyond comprehension Dev (Abhay Deol) doesn’t cut it, he stumbles through the film (literally) and cant make up his mind what he’s so damn upset about. The acting is very substandard, Paro is hyper active (couldn’t get over the fact that she got this role perhaps), Chanda doesn’t change her expression and Dev is…well, drunk (and I really wish he had kept his shirt on)! Abhay was far better in Oye Lucky…any day!!

The movie has its plus points. The music is used as a narrative and the treatment given to it (fade in fade out) is interesting. But the 18 songs sound soundtrack starts getting on your nerves as this 3 hour long movie moves along. It’s a good job at background score, just not something I will remember when I leave the hall. The script doesn’t give in to the obvious and refrains from cheap one liners. I agree with Masand, look out for a particular scene in the bus involving a bus ticket. That one shot was paisa wasool for me.

Go watch the film for an interesting love triangle, a lot of neon lights, a break dance sequence in a pub, a view on how the MMS scandal a couple of years back changed the life of a school girl and some time pass. Better still, get a DVD.

i'll look forward to the DVD on bigflix :)

ok. I guess its best watched online only-forget getting a DVD then... ;)

I did find the film ok, though, people keep talking about it's greatness...one of the best reviews on the film I did read here:

Thanks for the link Raeks...I agree with the review....esp the part that Kashyap has portrayed Paro and Dev as sluts and Chanda as the image of pure innocent love