.
Delhi 6 starts off nicely enough. The swadesi returning to his motherland India to fulfill his grandmother’s last wish is a line taken before and much appreciated. Ofcourse if their abode in India happens to be the ever-bustling Chandni Chowk, it sets the perfect backdrop for a film. The only way I can explain Chandni Chowk (as shown in the movie and in real life) is when you have been cooking a well herbed mutton biryani inside dum and finally open the lid, the burst of flavors and aroma reaches out to you and numbs you for a moment. Chandni Chowk is like that. Its colorful, it’s always chirpy, it has a life of its own. The place may not be the cleanest locality, but it gets my vote for one that has a complete and distinct personality. 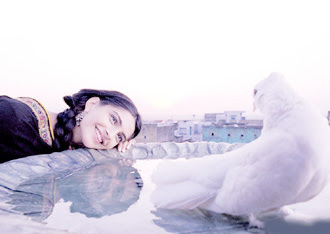 Which is why I loved the first half. The Chandni Chowk showed in Kabhi Khushi Kabhi Gham was a sham and completely unrealistic. And though parts of this movie have been shot in Rajasthan, the locality is very similar to that of Old Delhi. The same narrow galis (lanes), the same hole in the wall shops, huge ancient doors separating one lane from another and no place to walk. The houses where they stay are also very real with a wall built right in the middle of the courtyard to separate two fighting brothers, the Tulsi shrub in the center of the aangan (courtyard) and the narrow staircases that find their way onto interconnected terraces. The director did not go for large Havelis and opulent interiors as many do. Watching the film particularly reminded me of a Heritage Walk I took through the Old Ahmedabad finding my way through winding galis, old havelis dating back 200 years flanking the lane and opening into courtyards.

I must also confess that there is a high probability that the reason I loved the first half was because I am a self confessed Delhite. I was born here, have spent most of my life here and can not imagine calling any other city home. As Abhishek says in the film, its problems are mine but so is its glory. The movie doesn’t make any one community larger than life a la Singh is King, but shows you various aspects of life in Delhi albeit Old Delhi.

The Second half unfortunately goes downhill, not steadily but at an ever-increasing pace catapulting into a snowball of disaster. In his quest to bring in a social message yet again post Rang De Basanti, Mehra falls into the trap of bringing in too many and ends up patronizing the audience. The film would have been a better one if they had removed the entire angle of the Kala Bandar (black monkey) who is supposedly terrorizing residents (which is an actual incidence in Delhi but happened so long back that it seems fictional). It was unnecessary and repetitive. Also, the Hindu – Muslim divide is done to death and should have been left well alone. A film like ‘Bombay’ can not be surpassed.

In my opinion, if these 2 elements would have been removed, what you would have is a sweet love story between an ambitious girl from a not so open minded family and an NRI in the backdrop of all these wonderful characters. Each person in the ensemble cast has done a great job, be it Bandu the Jalebi wala, Jalebi the untouchable, Gobar, Waheeda (as graceful as ever, the sweet bua and not to forget the adorable 2 boys who did not even get a mention in the credits. Sonam is the image of classic unaffected beauty and doesn’t put on any airs. She floats through her performance brilliantly putting the dumbstruck Abhishek in place when required. Rishi Kapoor is his reliable best. Abhishek wasn’t bad but has done better. Cyrus was the disaster – completely wasted and gave a wooden performance.

The music also demands a mention, I could have been spotted in the hall dancing on my seat whenever a song came up. Rehman, the man of the day with 2 Oscars, did a great job and Genda Phool is something of a national anthem as are Kala Bandar, Masakali, title song and Raina Tu. Cant wait to get my hands on the CD.

The screenplay was also designed in an interesting manner around a Ramayana skit drawing a correlation between the epic and modern day evil. Another special mention goes to a fakir who keeps walking around showing people a mirror, urging them to look within themselves, a concept that I loved in the beginning but was torn to shreds when Abhishek started spelling out in his sermon in the second half. Should have been left unsaid.

My Paisa Wasool moment in the film was when the 2 boys face Jalebi and blurt out “Mujhe Mard bana de”. These 2 feet somethings had the hall in splits!!

All in all, get some popcorn, enjoy the first half and go home in the interval. Trust me, you wont regret it.

now that Iv seen it - We actually enjoyed the movie esp the significance of everything that makes sense in the 2nd half. I thought it was well conceptualized and presented. the way people use excuses like the Monkey-man incident i remember hearing about in Delhi while i was there a while back is laughable and then sad! how easily we let ourselves get incensed over issues that destroy yrs of friendship etc-the symbolism was quite interesting we thought.
the concepts of blaming things on the 'unseen' or 'seen' gods in potatoes, in chips and what not; untouchables; brothers putting walls in the middle of compounds, etc are real issues still seen in many parts of India sadly...

n yes the mujhe mard bana de was too funny!!! :D again the jamadaarni story was believable and shows the hypocrisy of society and men!