.
This month started with a trip (to Agra) and ended with one to Jaipur last weekend! What a life! With a long weekend coming up, we made a spur of the moment plan to head off to Jaipur and that’s just what we did. Jaipur is at a decent 220Km. distance from Delhi and the excellent highway makes it a lovely drive. It was the first time that I drove for so long on a highway! I almost drove around 300 Kms on this trip and loved every second of it. On route to Jaipur, we turned into a bylane and took a short detour towards Samode Palace. The palace is rather a lovely Haveli built around courtyards with fountains and boasting of some spectacular rooms like the Sheesh Mahal (Hall of mirrors). 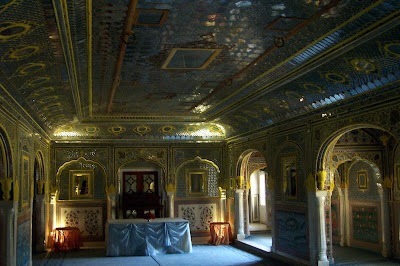 They offered a buffet lunch for Rs.1100 plus taxes per pax but we settled for going a-la-carte and had a scrumptious Laal Maans (Mutton in red spicy gravy). After being treated like royalty (well, they better have, considering the entry was Rs.500 per person), we got back on the road and headed towards the Amber Fort. 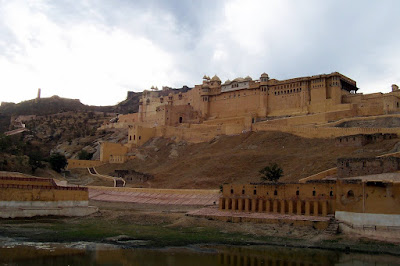 The Amber fort (pronounced Aa-m-ai-r), is a spectacular edifice on the edge of a cliff 20Kms. outside Jaipur. Originally built of a pinkish rock (and now painted yellow for some strange reason), the fort was started by Maharaja Man Singh (the famous step brother of Jodha of Jodha-Akhbar fame) and built by two generations after him. The fort itself is not too large in terms of the palace inside but has a phenomenal 20Km. long wall around it to protect the fort. India’s very own Great Wall!! The guide we hired happened to be more of a movie buff than a historian and he gave us a very engaging (if not informative) tour of where Sridevi walked and where the Mughal-e-azam song ‘Jab Pyar Kiya to Darna Kya’ was shot et centra et cetra….. Needless to say, the husband thoroughly loved the tour. The guide was also convinced that Jodha was not of royal blood and was actually a dancer in Man Singh’s courts….hmmmm, not so sure about that!!

Something worth mentioning here, is that though the architecture of the palace was very Rajput, there were distinct similarities with Mughal Architecture in some places. The marble sculpting was a replica of the one seen in Taj Mahal. A single rock sculpted carefully to show the turn of leaves….remarkable. 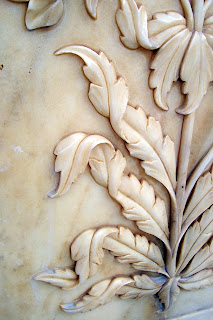 As the sun set, we headed off towards our hotel, a heritage ‘haveli’ called ‘Nana-ki-Haveli’ belonging to a The 120 old building was gorgeous and every corner of the place had a story to tell. Waking up in the morning and sitting in the verandah (balcony) sipping tea served in real silver-ware…that’s the life! 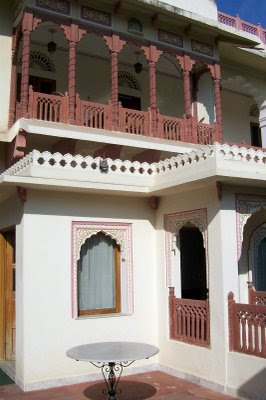 
For dinner, we decided to be a little adventurous and tried out a backpacker’s favourite – Meditterano. It’s an Italian rooftop restaurant (if you can call it that). Very basic, with plastic chairs and the like but the setting is great and candle-lit. They had a wood fired oven and their pizzas came highly recommended. We tried out a pizza and a spaghetti carbonara which once again reinforced my belief that as much as I may love Italian food, authentic Italian is not my cup of tea!! The pizza was wonderful and crisp but a little too bland for our palette and so was the pasta. I’m half afraid to go on my dream trip to Italy lest I discover my favourite cuisine in its pure form is not anything like what I appreciate!!

So ended a long day well spent….and the next day calls for another post….later then…
at January 28, 2009

Did you know they shot 'Paheli' at Samodh...
Did you get a chance to go to Samodh Bagh as well-the hunting 'camp'...
Rajasthan havelis/palaces... shayad main yahaan kisi janam mein... u know the feeling I always get there!!! ;)

Nice! But trust me, in Italy the food is to die for and not at all bland.