There is a poem I had posted here a couple of months back. It struck a chord with me then and it does now....the last few words of the poem:

When it is truly time,
And if you have been chosen,
It will do it by itself and it will keep on doing it
Until you die or it dies in you.

Ho ho ho and all of that!! Christmas is here....time for the holly and the festivities...for trees to light up and tables full of delicious fare....for gifts and sharing!!

Refusing to do a serious blog on this awesome day, here is a short and silly quiz on how much you know about Christmas (and not historical type boring stuff)!!

Disclaimer: I know goggling it is very tempting but give it your best shot without checking, it'll be interesting to see the answers:

1.In what century did 25 December become the traditional day to celebrate Christmas?

2.Which famous Christmas story begins 'One dollar and eighty-seven cents'?

3.What colour is Santa Claus' belt?

4.Which country traditionally provides Britain with a Christmas tree for Trafalgar Square in London?

5.In the Ukraine, what does it mean if you find a spider web in the house on Christmas morning?

6.How many reindeer does Santa have?

There are actors, there are stars and there are super stars! Let me help you understand the line that separates these. Take some recent films for example. Dasvidhania was a short sweet film which won completely basis its acting. Vinay Pathak proved his versatility and acting poweress. He is, what we call an actor.

Then there was Singh is King. A completely nonsensical movie with no story to back it or any great acting to write home about. Akshay Kumar did what he does best - comedy and pulled in the crowds. He is what we call a star.

Then came Rab ne bana di jodi. The reviews trashed it, called it names and forbade people to watch it. Result? Theatres that went housefull. Not just in the opening week but the next as well. Reason? Not Aditya Chopra, not the story, not the music. One simple magical word called SRK. Even if a movie was doomed and made as terrible as possible, you and I would watch Shahrukh Khan once on screen atleast. Its a sin not to. That, my friends, is the power of a Super Star.

The problem happens when a star and an actor like Aamir Khan tries to hold the Super Star mantle. He's a brilliant actor no doubt. Makes some of the best movies of the year. But a Super Star he is not. His personal involvement stops him from being one. To promote his films, Shahrukh may go on a talk show or at best visit a mall. Aamir Khan, according to the newspaper today, took to the streets of Delhi and with his own hands gave people the Ghajini haircut (which is just a fancy name for what NDA cadets know as a way of life). All to promote his new film. Great marketing tactic. Terrible for brand building. Aamir, no matter how many pups you name SRK, Super Star you are not....atleast not yet.
at December 22, 2008 1 comment:

I am yet to decide on a favourite book. There are many that I have liked but none that would be the best ever. The list started with Not without my daughter (Betty Mahmoody) and went on to add City of Djinns (William Dalrymple), Harry Potter Series (esp the last one), Da Vinci Code and many others. A key member of this prized collection is “Shantaram” by Gregory Roberts. Shantaram was a revelation. Not only because of the story (which in itself has more twists and turns than any fiction ever written), but also because of the characterization, the flair of writing and the vivid memory of the author.

I don’t believe that a movie (played by Johhny Depp) can do justice to such a brilliant book. Thankfully, the movie is on hold now and there’s not much talk of it.

Shantaram has had such a brilliantly colored life that it makes an engrossing read. In his book, he exposes the Mumbai underworld, the terrorist activities in some countries, flesh trade, sex workers etc. One of my favourite sections is when he lives in the slums for more than a year and learns their ways and mannerisms going on to become the slum doctor. His flair for writing coupled with his photographic memory makes this book as vivid and imaginative as a Harry Potter novel (well, almost). As you walk this road with him and see him evolve from the convict that he was to a slum doctor, a mafia member and eventually one who wants to come clean, you can not help but applaud him. It is not that he always did good things, but the humility with which he accepts it and moves on, talks of a man with character.

Shantaram paid his dues in the prisons and is back in India. He is settled in Mumbai and it is not uncommon to see this tall burly man with his blond hair in a long ponytail riding his bike in Colaba or having a beer at Leopold with his wife (a Swiss Princess). He has recently been seeing back at his favourite haunt Leopold to show solidarity with the city.

Anyhow, in an attempt to bring back some semblance of normalcy in life, this weekend we decided to go catch the new film “Oye Lucky Lucky Oye”! What I love about the film most is its name. You can not help but sing out the name every time you hear it (yes, hum it in your head now)! Imagine the Husband’s embarrassment when he went up to the counter and said “Two tickets for Oye Lucky Lucky Oye” :) !!! 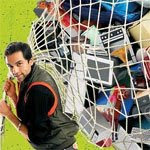 If you haven’t heard about the film, its ok, don’t chide yourself. They barely did any promotions and there are no big names to attract you. Abhay Deol (the only Deol of this generation in my opinion who can act) plays the main lead. He plays a Delhi boy from a deranged (trust me on this) family who grows up to be one of the smartest petty thieves of the country. Abhay played out his character brilliantly and you can’t help but love him. The guy who plays his role in flashback also did a great job. Paresh Rawal and Archana Puran Singh are predictable but funny.

The story line may remind you of Bunty aur Bubbly but don’t be fooled. The problem is not the lack of familiar faces. The problem is with the story line. Or the lack of it. The film is a series of witty lines and funny scenes strung together sprinkled with some very hilarious but strange music. Even with my decent understanding of Punjabi, I couldn’t make head or tail of most of the songs in the film.

Lucky, the protagonist, starts out playing an ambitious petty thief which is where I guess the problem lies. The fact that he ends up a petty thief even in the end. Even though he has the country’s police behind him, his kind of theft involves walking into a house and picking up just about anything he can see….as small as a photo frame!!!

Anyhow, the movie is a laugh riot. You will thoroughly enjoy it while you are in the hall…and just as soon forget it as soon as you step out. Good pure entertainment.