What a fun weekend. I am wondering whether to blog about the new restaurant we discovered or to review the movie we caught yesterday. Food leaves a lasting impression so let me talk about that in the next one.

Lazy Sunday afternoons beg for an exciting evening so we went on to catch the new movie – Dostana.

If you are movie critic, gay rights activist or just someone taking himself/ herself too seriously, please do pardon me for my review. Despite what the critics say - I loved the film. It is an out and out comedy with no head or tail. Yes, it is full of clichés; yes, Priyanka does seem to have a Neil and Niki hangover (I don’t see anyone complaining though); yes they wasted brilliant actors like Boman Irani and Kiron Kher. But at the end of the day, what you do get is a hindi masala movie that had the entire theatre in splits.

The film is about 2 supposedly hot guys (John I can imagine, but Abhishek???) who lie to their flat-mate Priyanka about being gay so that they can get to stay in her cool apartment. As neither of them is really desperate to move to a new place, it does seem odd that one would fabricate such a story just for the appt. Nevertheless, they do move in and the story goes on about how the 3 of them become great pals. 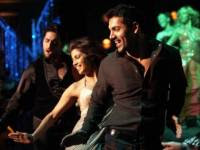 The script writer threw in some witty quips and the first half will have you in splits. The acting is not bad and what works best is Abhishek Bachchan being completely at ease with taking his own case. The fact that someone can get so into the character and make such a complete fool of himself truly deserves applause. Thankfully, he doesn’t take off his shirt a la Johnny boy (who can afford to do so). For some strange reason his character is believable because he drives a pink Cadillac, wears pink clothes and sports a red watch (even while he is supposed to be straight…why????).

So don’t listen to those spoil sports who are trying to find reason in this madness….go check the movie out. I loved it…so sue me!

and yes loved Abhisheks comic timing in this one! and Johnny boy is just too hot!! :D

was glad to have some eye candy for the girls too! ;)