.
Hollywood has come a long way in action sequences and special effects. If you compare recent action movies to those made 2 decades back, you will notice the finesse with which the new ones are executed. The cuts are sharply edited and no unnecessary talk dilly dallying with the villains.

Quantum of Solace is another one from the same genre. It is a fast paced film where you really are scared to blink or breathe lest you miss the next shot and lose track of the scene. The action is quick and hard. More than once in the movie, I found myself trying to duck a punch that Daniel threw, which is how realistic it was. The stunts did not dwell on themselves and did not give you enough time to appreciate one before the scene moved to the next.

The story, like in most action films, was irrelevant (with exceptions like Bourne Identity). The good guy trying to get the bad guys (who, his government is convinced, are not so bad after all). Aiding him is a pretty thing who kick-boxes with the same finesse as dropping a tear. What they do in the interim is immaterial, point is that in the end, they get the bad guy and he gets his due. 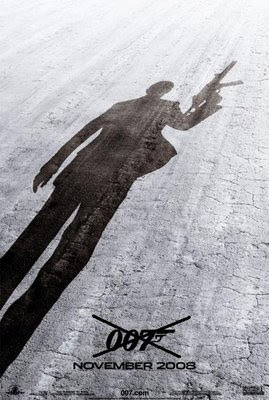 Or unfortunately not. While writing this review, I had almost forgotten that this is a Bond film. Which is what I suggest you do too. Quantum of Solace is a well made action film that might even get a 3 or 3.5 on 5. But the second you expect me to believe that this man running around throughout the movie in a soiled tux with a blood stained shirt, breaking people’s noses and wallowing in the loss of his beloved, is Bond – all I can do is blink and look at you as if you are raving mad! Because he is not. Its not even about him saying “The name is Bond”, or his martini being shaken and not stirred, its not about the gizmos that he is supposed to carry or the fact that Bond doesn’t fight like street fighters, its about the basic fact that Bond is the ultimate in charisma, sophistication and witticism – each of which this movie lacks.

I refuse to rate this film in this review. Because they lied to us. I want Bond back.
at October 11, 2008