I haven't felt like writing since a few days and that is quite uncharacteristic of me. Writing is more often than not like breathing where I am concerned so this sudden lack of motivation to pen down something needs some more examination.

So,woke up today and decided that I can not give in to this, and here I am back doing just that!

We saw Kidnap a week back. Even dragged my dad out of his holiday stupor to see this movie that was hyped like most are. Imran Khan - the new kid on the block...in a mean new avtar. Sanjay Dutt like never before. Manisha Lamba....ummm well just Manisha Lamba! So what does one say about the hype after spending 3 hours and a couple of hundreds in a hall? In one word - 'Blah'!!! 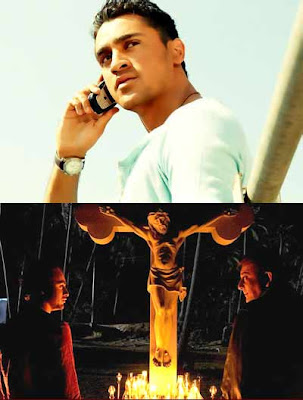 I have just one question. Why did they bother making this movie? I mean seriously, there is no premise, the script is one of the most pathetic ever and the actors seem to be taking themselves too seriously. The done - to - death cat and mouse story of a kidnapper and the hero is one that can still make a good screenplay for some great hollywood flicks. Then why did the writer not bother to take this one through? Correct me if I am wrong, but if someone is giving you a set of clues (which were ridiculous in themselves) and leading you upto a location (where you the kidnapper are, by the way), why would you hide in a cupboard and wait for the person to leave????? For heaven's sake, you just spend 4 days of your time and 2 hours of mine trying to get him there in the first place!!!

Leave the story aside, lets come to the actors. I dont blame Sanjay Dutt for running away from his family....if you see the kind of clothes Manisha Lamba (who plays his daughter) wears (or doesnt wear), any father would!!!! Someone seriously did some cost cutting in the poor waif's wardrobe budget. Picture this - you have been kidnapped, you are in a house alone with this crazy guy. And what do you wear? Barely anything!!!! And you manage to do a few dances with him on waterfalls in the mean time as well!

Sanjay Dutt was alright but age is catching up with him now and his paunch shows! Imran Khan just did not cut it! He has over exposed himself. And the best is that after the whole drama is over, he comes back to meet his victim in a very lets-keep-in-touch kind of way...and she agrees!!!!!!!!!!!!!! Geez!!!

If you feel my emotions seem a little exaggerated, pray do see this movie. And come back and tell me how many hair do you have left on your head that you did not pull out :)!!

i can so understand your frustration! bloody pointless movie!

though i though Imraan was quite ok. apart from the opening scenes and brilliant dialogue "Maine tumhe Kidnap kiya hai" (which led to peals of luaghter in the hall), he was quite decent!

pls to read tormented hubby's review on vidooshak.blogspot.com if you feel like sharing the agony! :p

i actually didnt mind the movie! her dresses were quite strange - but i think she wore only what he got her-remember the scene where she goes thru her 'new wardrobe' while she's there? the waterfall scene-well she was trying to seduce him to kill/maim him n escape.
all said n done-I thought Imran looked quite delicious-though he can be directed better i felt-and as for dancing for him-well if the kidnapper is anything like him-I wonder if I might be crazy enuff to do the same!!!!! :P

we liked it better than Drona, for sure-which cud certainly have been edited and done better-too slow for the storyline!

Abha, loved vidooshak's review....will follow the blog as well now.... I agree with you on the dialogues, it gets my vote for the filmfare award for the same:)!!

Ras, stop trying to find reason in this madness!! Her mother looked younger than her for heaven's sake!!