The new and swanky Bangalore Airport was honoured with my presence last week. As I got off the Jet Airways flight (which surprisingly served an amazing chicken and cheese pizza inflight) and entered the arrival lounge of the new airport, I was a tad bit disappointed. Relatively large and airy though it was, the airport did not seem anything to talk home about. It took them all these years to build this, I thought to myself! I briskly walked out and located my cab. The facade outside was much nicer though with a well planned parking and pick-up area that reminded one of the Dubai airport. 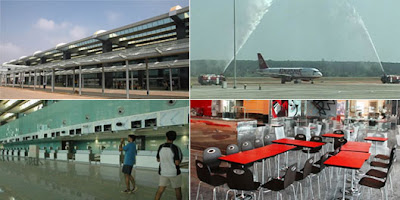 The drive from there into town was another matter altogether. It is no secret that Bangalore has worse traffic than most cities in India. Add to that the fact that the airport is more than 40 Kms outside the city in the OTHER direction from the area with all the IT offices. It took me more than 7 hours after I left my home in Delhi to reach my regional office there!

On the way back, after a harrowing 2 hours drive, I entered the airport and checked in. The atrium was nice and large similar to the Mumbai domestic departure. Climbing up the stairs, I proceeded towards Security check. It was here that I discovered what the hype was all about. Built on the lines of an International Airport, it had a variety of shops to spend your time. A crossword (A chain of book stores) was the obvious priority given my love for books. A book heavier and several hundred rupees lighter, I proceeded to check out the stuff at Shoppers Stop - which had a full fledged store in there. There was also a shop that sold the regular airport gifts like Snickers, Mars, Nuts etc. A nicely laid out Barista (coffee shop like the Starbucks) and an Illi (American coffee shop) were all there for one to sit down and relax.

None of the cramped surroundings, no scrambling for seats. No buses to put you on the aircraft (they used the chutes like International Airlines). Walking into my flight, I bid adieu to Bangalore, to the memorable time I had there and to the latest addition in its cap - it's cool new airport!
at September 22, 2008

Email ThisBlogThis!Share to TwitterShare to FacebookShare to Pinterest
Labels: Travel

if only they made road to the airport better i would be a happy woman!!

till then it doesnt atter how swanky it is if you are gonna reach all hassled and mad.

plus you were lucky to get a chute. most flights still are reached by bus! :D

1. the airport is miles away from civilization - takes 1-3 hrs to reach the inner parts of city from there
2. the airport is all hype - with swanky resturants and glitzy shops (no comparision to the likes of O Hare and Heathrow)
3. Something as functional as a plug point for charging of laptops is missings (which by the way is present in most domestic airports in the US) - lucky me, had to stand for 30 mins amidst the unbearable stench of the men's loo.
4. Jet bridge is present but not used for most flights. This is standard in some airports like Calcutta

Supra, nice to see you here! Isn't it just in the middle of nowhere? My cab guy thought it ridiculous that I planned to make it in time for my meeting 2 hours after I landed!!

Did not know that the chute is not a common feature though. I got lucky I guess! And the plug points is a good observation...I did run out of battery too while typing away on my blog at the airport!