Rock On rocks all the way...

Refreshing, honest and real. Thats Rock On in a nutshell. It's not a movie that pretends to be something else. Its not a soppy romance nor is it a documentary on rock bands. The movie is a story of 4 friends who have a band called 'Magik'. As life takes over and makes them move away in different directions, they find themselves stuck in a life that they never wanted. The music still plays in their veins but can not find expression anymore. 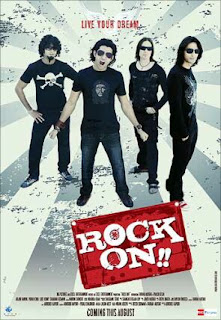 Some say that the movie reminds them of Dil Chahta Hai. That may be inevitable as Farhan Akhtar not only acts in the film but has also produced it. But frankly, I could find no part I could say was influenced from the film.

Farhan Akhtar, as expected, does brilliantly! The man is sheer genius which given his genetic make is not surprising. What do you expect when you put the talent of Shabana Azmi and Javed Akhtar together! He not only does a great job acting (and its a good role which shows various facets of his personality), he actually sings all his songs!! The man can direct, act, sing and looks great too!! Some people have it all!

Luke Kenny plays Rob on the keyboard. He too does a decent job of his role. Arjun Rampal seems a little restrained in his acting and sometimes one feels like shaking him up and saying "Come on...we know you can loosen up". But all said and done, he manages to play the frustrated loser quite well. Prachi Desai plays the elegant sweet wife of the rich man and does a passable act.

My favourite in the movie though is Purab Kohli. The man is so versatile and manages to get a smile on your face everytime he's on the screen. I'm not sure if it's a factor of the script or his acting, but he wins hands down.

I liked the movie for its casting largely. The cast consists of people for whom acting is not their main profession. Farhan is a director, Luke a former DJ went on to head programming at Channel V and quit in Feb this year to pursue his interests in music and films. Arjun Rampal is an erstwhile super-model. All of them started off doing something else and realised that their heart was not in that. Not too many people have the guts to walk away from the familiar and try out something new.

The music of the movie gets you tapping your feet and even before the film is over, you are already waiting to get your hands on a CD.

All in all, Rock On rocks....its a movie made for the metros and for people like us who can probably relate to it. Who isn't stuck in a job far removed from what they thought they would do back in school right??

will definitely watch it now! Thanks :)
Just one thing though-shabo rani is his stepmom... his biological mom is honey irani-who helps make an equally good talent pool! n he's a cousin of farah khan.

now i am getting like l'il more desperate to watch this one!!! soon i hope!!

Thanks for the clarification Ras...Honey Irani is just as talented and it helps having Shabana around the house!!

Thanks Abha...do watch it and let me know your take on it..

Ok! now that i have seen it! you are a woman after my own heart!!

while everyone has been droooooling over Frahan Akhtar, my heart totally went to Purab Kohli. He is the no hassles guys who loves all these people to bit and wont let his ego come in the way of a relationship!!

AND he has a sense of humour! i always have soft spot for the funny guy! married one!! :D

I knowwwww....dont you just love him?? Do they make them like that anymore ;)??