The Pyramids of Giza - Twice Over!!

I was trying to lull myself to sleep yesterday night and it was proving extremely difficult. Viral fever, sore throat, common cold and Delhi humidity make a potent combination and do not leave much leeway for a good night’s sleep. So I allowed my mind to wander towards pleasant thoughts hoping they would help. And then I remembered this anecdote from our trip to Egypt last November leading me to admonish myself for not sharing it here!!

So here we were, in Cairo, the capital of the land of Pharaohs. The city itself was a concrete dump, one which made the smallest towns in India look majestic. But we were staying in a nice part of town near the Nile where the Diplomats reside so no complaints! Ofcourse when you hit Cairo and have only 24 hours there, the first thing on your agenda is to visit the Pyramids of Giza. The famous pyramids are 3 of the many such structures strewn around the country but have gained popularity as being the only surviving monument of the 7 Wonders of the Ancient World. The others, namely Hanging Gardens of Babylon, Statue of Zeus at Olympia, Temple of Artemis at Ephesus, Mausoleum of Maussollos at Halicarnassus, Colossus of Rhodes and the Lighthouse of Alexandria have all since succumbed to the forces of nature and do not exist anymore.

We set off early next morning, to beat the crowds at Giza. A 45 minute Taxi ride and two 100 Egyptian Pounds (which was HUGE as we could have a lovely meal for 2 for around 40 EP) tickets later, we were gazing at this symbol of power and stability. The pyramids are not particularly beautiful or artistic. What is special about them is that they are built using boulders almost as tall as a man, each weighing a ton and a half, in an age when no machinery existed. How those workers got these stones to the top is truly a wonder!

We took lots of photographs, the typical touristy ones and even the artisty ones with the sunlight playing on the hues of the desert. The Husband also managed to take a couple within the tomb which was a strict no photography area. Finally, by 3pm we were exhausted with the desert sun and famished as well. We said goodbye to the Pyramids and the Sphinx and hailed a cab to take us to the Egyptian Museum, next on our list and home to famous mummies. Barely 2 minutes after we had exited the cab, The Husband gave a start and started frantically searching his rucksack. After much cajoling, I figured out that we had left our precious camera which had our very precious Pyramid snaps in the cab! 30 minutes of pure despair followed and the conclusion was that if we went back to India and did not have any snaps of Pyramids to show, it would be touted as the tragedy of the year and we would never live it down. So I took the only decision I could and told him that we would go back. We would sacrifice our entire itinerary in Cairo for this little trip but I couldn’t see the look of anguish on his face. And luckily we had our second camera safe and sound.

So dear friends, back we sat in a cab for the 1 hour drive to Giza. Luckily we convinced the ticket guy to allow us on our old tickets. What we had achieved in 4 hours in the morning, we achieved in 30 minutes, posing at the very same spots as we had in the morning. People wondered why were rushing from pillar to post taking snaps and not admiring the Pyramids but how could I tell them!!

So every time anyone mentions the Giza Pyramids now, I find myself jumping into the conversation with gusto. It was after all, practically our second home in Egypt!!!

Now you know the truth behind these snaps: 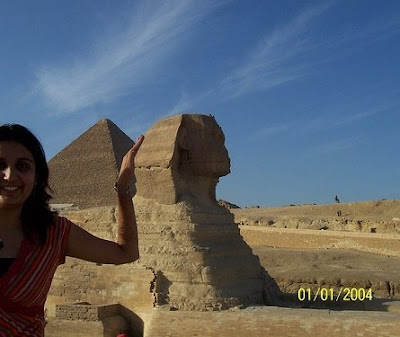 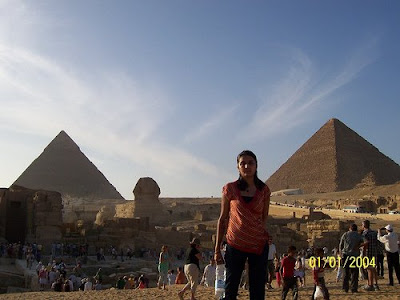 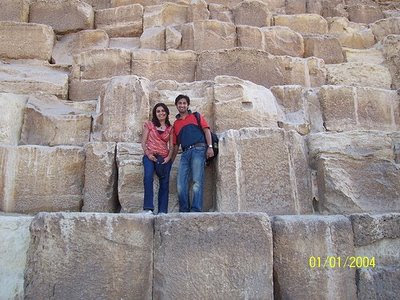 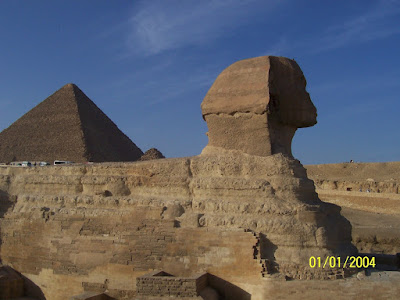 Email ThisBlogThis!Share to TwitterShare to FacebookShare to Pinterest
Labels: Travel

hilarious! :D good on u! for not letting that spoil your trip n taking another trip out there for these very precious pics! now u have a tale to tell the kids! ;
)

you are crazy but you did the right thing!