.
The Husband returning from Leh (yes, yes – I will put up snaps in the next blog) called for celebrations and the weekend begged to be packed with more excitement than usual. So we deviated from our usual one movie per day on weekends to have a movie marathon and went ahead and saw 2 movies on Saturday in the hall. We started with Jaane Tu and ended with Hancock though I wish in retrospect we had done it the other way around. So, I will review them in reverse order. This one is for Hancock. 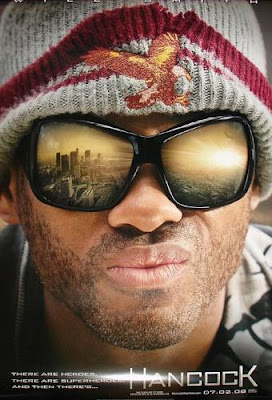 I must admit, it’s a movie I had been looking forward to for very long. To start with, it starred Will Smith. He has a way of making the worst roles look good in his crazy-I-don’t-give-a-damn style. Add to that, he plays a superhero! I mean, what else can a girl ask for?? And with Halle Berry winning Oscars and Obama being slated for President, who says we aren’t ready for an African American Superhero (trying to be as politically correct as possible)??

The movie starts off on a good enough premise. He has supernatural powers but is careless about using them. He’s quite amusing in his abusive nonchalant role. Not too sure why he would prefer to sleep on a bench on a Washington DC street when he can transport himself just about anywhere, but then let’s not nitpick here. The public though, doesn’t appreciate his gestures much and choose to harp on the damage he causes with his carelessness. Enter Jason Bateman, who is saved by Smith from coming under a train. Bateman happens to be a PR guru and helps clean up the latter’s image.

The movie unfortunately starts going downhill hereon. The twisted story about the truth behind Bateman’s wife Charlize Theron and the drama that unfolds seems like a forced attempt to bring in twists in the story. Unfortunately, it ends up killing the plot and one is less than impressed with the theatrics.

All in all, not a bad flick. Will Smith is worth a watch and will justify an evening in front of the TV. But do yourself a favor and watch it on DVD….the trip to the hall just doesn’t seem worth it!!