.
A fast paced movie about 5 college students at MIT and their professor who have found a mathematical way of “Breaking the house” at blackjack. In layman’s terms, it means that they figured out a way to make sure that they win every time in the game.

Ofcourse if you take this skill to Las Vegas, it can earn you hundreds of thousands of dollars. Which is where this led them. Until the system caught up. 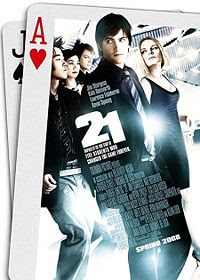 A true story, 21 is a slick flick which doesn’t let you get bored for a moment. The performances are all good but in particular Jim Sturgess who plays the protagonist outshines the rest. He easily moves from the nerd at MIT who can barely walk up to a girl to a suave rich kid in Vegas. His dorky friends play their role well reminding the audience on and off what the protagonist really is behind his mask.

Another great performance is by Kevin Spacey as expected. He plays the MIT professor who starts from winning your heart with his jokes in class to being the object of your hatred when he starts ruining lives of people who cross him. Spacey’s character is tight, arrogant and just right.

The story line is intriguing as is but the screenplay becomes more interesting with the narrative format. The movie is narrated throughout by the protagonist Ben and it comes to a neat close at the end.

Overall, a good watch. Throw in a lazy evening, some pop-corn and you have a winner.

Nice to see you are alive and writing! ;) Good stuff...your meeting with the Delhi Daredevils made me envious... and your recipe made me hungry. That is much more than the impact of all blogs I read put together!

And by the way...the blog address has changed. Grimescene.wordpress.com.

I know...i keep peeking into the old one and saw the post about the new blog on tht....ofcourse thought that you had completely lost it when I read the one about the car racing :)!!