The Chronicles of Narnia - Prince Caspian 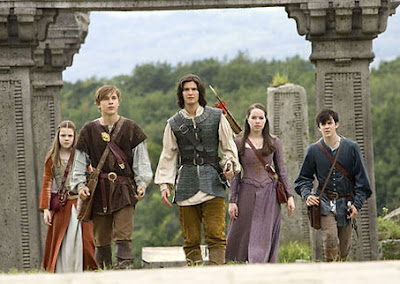 I am not going to pretend that I am an authority on the series. Harry Potter- yes….Enid Blyton- perhaps but Narnia – not really! So much so that I haven’t even seen the first movie – The lion, the witch and the wardrobe or more importantly, read any of the books written half a century back. And I feel like kicking myself for the same!

The Chronicles of Narnia is a series written by C.S.Lewis between 1949 and 1954. The first and second have been made into movies already by Walt Disney. The stories revolve around 4 children who magically get transported to a land called Narnia to help Aslan (a lion) fix some wrong-doing. Narnia is a land where animals talk and magic is a way of life.

This movie, the second in the series is about the children and Narnians trying to get back the kingdom to Prince Caspian from the hands of his very evil uncle.

It doesn’t take much to understand why I would have fallen for the movie as soon as I saw it. Mention anything to do with magic and I am your fan for life! But then, its not just that. Prince Caspian, the movie, has taken a great story and presented it in a way that is visually riveting. The locales are breathtaking, the costumes very pretty and each character has been given a certain attitude that is different from the others. Peter is the one who likes to be the undisputed leader and likes to do things alone. The centaurs (which remind me so much of Potter) are full of dignity and honour. Even the little mouse who refuses to be called cute enacts a certain role – one that somehow reminds me of puss in boots in Shrek.

I would recommend this movie to all age groups. It is not a children’s animation flick in my opinion. Ofcourse, the husband tends to disagree and thought it was just ok. But, I reminded him, if the animals were replaced with ugly looking men (a la 300), he would have been much happier!