Hunt for the perfect Caesar Salad 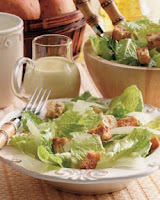 Sometimes the simplest of recipes is the most elusive in the quest for perfection. The ever popular Caesar Salad may seem like an easy one to toss for even the uninitiated, but as I found out, is so easy to mess up too!

In my quest for the best Caesar Salad in Delhi, I searched far and wide (Trust me, when you travel in NCR - everything is far). On a friend's recommendation, we went to my favourite Italian cafe - The Big Chill Cafe. Their version of the salad was tossed with bacon. It pleased....but it failed to go that extra mile. We walked away, though not hungry anymore, not victorious either.

Then, a cousin took us to Pizza Express in Ansals Plaza. Their Caesar Salad was renowned to satiate even the most finicky foodies. Alas, their chicken version of the salad did not even rate 2 on my scale of 5. The lettuce was not crispy enough, the chicken was too less and the cheese suspiciously did not resemble parmesan.

It's next door neighbour - Geoffreys, though, came close to meeting our standards. On weekends, Geoffreys does a lovely lunch buffet that thankfully not too many people know about. Their selection of salads, entrees, main course and deserts are true value for money. Coming back to the salad, their chef tosses the same live for the guests. You may customize it with olives, sweet corn or sun dried tomatoes as per your taste. The lettuce was fresh, the salad well flavored and the cheese true parmesan. It rated a 4 on my scale of 5 and we thought this would be the closest we would ever come to the perfect salad.

And then it happened....as the great Julius Caesar (After whom the salad was NOT named) said, I came, I saw, I conquered! Or rather, I came, I ordered and it conquered me! The perfect Caesar Salad is made in a fabulous restaurant in CP called Picadelhi. The salad is such that the moment you put a fork-full in your mouth, you can not help but close your eyes and savour the burst of flavors that take over your senses. The lettuce is crisp, the smoked chicken perfect and the dressing just could not get better! The salad gets a full 5 on 5 on all accounts including consistency. It has become a sort of a weekly ritual for me and my husband to go pay our respects to Picadelhi and allow ourselves to drown in this ecstasy. And it has not disappointed us even once....

Email ThisBlogThis!Share to TwitterShare to FacebookShare to Pinterest
Labels: Food