Ladies and gentlemen, the verdict is out - Chak de ROCKS!!! It is a huge ask to make a movie with Shahrukh Khan and not make him larger than life. For the first time, it has been done and done oh so well! When you walk out of that hall, you dont only remember Kabir Khan, actually you barely remember him. You remember Chautala and Preeti and all those other brilliant characters. But let me not jump the gun. 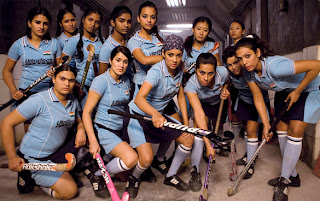 The movie in my opinion wins on three counts. Firstly, a sports movie if made well has the power to incite the audience. Chak de was fast paced, had all the ingredients of a sports match - the adreline rush, the fouls, team dynamics...Each match had the audience at the edge of their seats egging the team on! Even though every person in the hall knew the outcome of the World Cup even before they went for the movie, you could not help but keep your fingers crossed before the whistle would blow for the end of each match.

Secondly, each character was so well defined that you had no time to stare at King Khan. Cliches were brought to life with each state representative. But in their defence, who said that we dont believe in these cliches anyways? How many people really know where Jharkhand lies...or think that anyone from Punjab is not out to beat up the world...know the difference between someone from Manipur or from Nepal...its all true! We are prey to generalization in our daily lives and should awake to the cultural nuances of our vast country before we expect foreigners to treat all races with equality. Coming back to the characters, my personal favourite is ofcourse Komal Chautala. This little 2 footer is so power packed that you can not but like her! Preeti as expected is quite a hit with the guys around and surprisingly, Bindiya's arrogance also seems to work for many. Its amazing how you can get a bunch of names no one knows about and get them to give a performance rivaling the likes of Jo Jeeta Wohi Sikandar.

Lastly, what I liked about the movie was that it brought to face realities of women in India across society segments. Komal's father grudgingly letting her play so that she can 'get it out of her system' and come home to cook food may seem extreme but frankly is not a rare picture. Preeti's cricket star fiancee assuming that all she can be at the end of the day is his pretty wife was a slap in the face of the picture media portrays of the modern woman today. Vidya being called home by her in-laws to play 'bahu' instead of prancing around a field and her husband not having the guts to stand up to them is for many a reality.

Chak De is a winner through and through! Its a movie I can sit and discuss with my friends over a cup of coffee for hours altogether and not get bored with....but dont take my word for it...go check it out for yourself!!
at August 16, 2007

your should write movie reviews for a living! a well written review on matter understood... great to read!

Well written, Hanu! What an awesome writer you are.. keep up the good work.

Here is wishing you a happy birthday :) Got the rakhi's from you, Rasna, and Preet. Matter of fact I have mine on now. Nina had a blast tying rakhis for V, A, K, and G. And doing it twice because Natasha sent a bunch too.