The boy who lived - Order of the Phoenix

The world as I see it is divided into two kinds of people - Potter believers and then there's the rest of the world. Harry Potter came into my (and millions of others') life when he was merely a clueless young kid. And he never left!

The latest motion picture, Harry Potter and the Order of the Phoenix is by far the closest depiction of the world of Harry Potter that Rowling created. The earlier movies merely managed to narate the story, but failed to capture all the nuances of the book. The wonder of the wizarding world, the awe of walking into a tiny ordinary tent and entering a palace. Harry's dread of the Dursleys, his ache to belong somewhere, his confusion of being the boy who lived and his thrill at being the youngest seeker.

The Order of the Phoenix scored on various counts. It managed to bring together the world of muggles and that of the wizards as two co-existing worlds. The order flying over river Thames on their brooms was not only visually appealing, but also finally brought the books in geographical perspective. The special effects were dazzling and befitting a series dedicated to wonder and awe. The scene where Dumbledore vanishes with a flash of light with his Phoenix fawkes was shot beautifully. 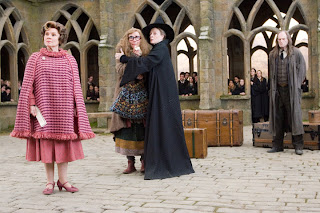 One of the best played characters was that of Dolores Jane Umbridge, the hogwarts spy sent by the Ministry of Magic. Her irritating giggle, the purse of her lips and her evil taunts almost make you want to reach out and give her a piece of your mind. Cho-Chang was a disappointment but surprisingly, Luna was a delight. She played her role to the hilt and you could do nothing else but like the little girl. Even Sirius Black was brilliant. Every time he would give that crooked smile and wink, i could swear that i heard a few hearts skip a beat!! 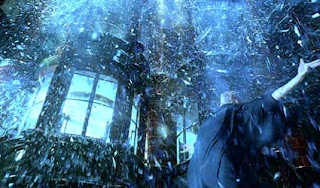 The movie also had a great sequence where good clashed with evil. Dubmledore fighting Voldermort was an awe-inspiring sequence. The two greatest wizards clashed their powers leaving everyone spellbound.

Why I love the Harry Potter series is something I will share another day. But for those like me who do too, one piece of advise - go and catch the movie. For once, you wont be disappointed.
at July 16, 2007

I did not know you are also in pottermania :))...I liked the movie as well...